THE END OF AN ERA: MAD MEN

The final installment of AMC’s Mad Men finds Don Draper much like we found him – married to his work, and detached from everything else.

Throughout its eight year run, Mad Men devised a clever knack of subtly reminding us of the year. Without shoving 1960s clichés down our throats, newspaper headlines and growing sideburns reminded audiences that times were rapidly changing.  And like most dramas that have come to dominate cable television, we’re far more interested in how the main protagonists react to such change, than the change itself.

But has Don Draper changed? His marriage to Megan – one that never felt right – came to an end in last year’s season finale. Bert Cooper, the father-like-figure of Sterling, Cooper & Partners, died while watching the 1969 moon landing. The departure paved the way for a merger, saving Don from the brink of unemployment. All seems well for the SC&P camp. Yet, it’s what lies ahead that Sunday’s premier will begin to unveil.

Don is far from a baby boomer, yet not quite the age of the generation that preceded. He navigated the 60s as a man caught in the middle; indulging in women and booze while maintaining charisma and class. On one hand, Don seems ready to pass the baton to his younger colleagues. Dancing with Peggy to Frank Sinatra’s “May Way” (another indication it’s 1969), he holds her with admiration of his fully blossomed protégé. The other side of the coin shows a man not yet ready to hang up his hat – a notion that could lead to the much-speculated demise of Don Draper. “Back to Work,” he remarks, as Peggy questions his exit from Sterling’s office eulogy. 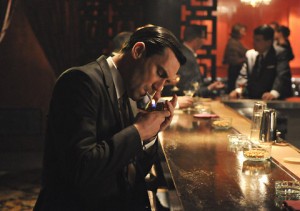 As the years have gone by and the 60s make way to the 70s, Don has not only failed to adapt, but continues to fall behind. The following decades won’t be kind to Don Draper, both physically and emotionally. Perhaps Don is doomed, but not in the way we might think. He will live. He will survive. And ultimately, he will continue to drink and carouse, if only to neglect his murky past. Unfortunately, this way of life will inevitably fall out of style as the country’s landscape receives a makeover. The last episode saw Buzz Aldrin and Neil Armstrong land on the moon, ushering in a new era and exploring fresh terrain. But Don is too set in his ways to follow suit. Don’t be scared for Don Draper, just feel sorry.