MALEFICENT Q & A WITH ANGELINA JOLIE AND DIRECTOR ROBERT STROMBERG

Between Angelina Jolie’s enchanting mystical presence, the bewitching cinematography and Elle Fanning’s youthful on-screen likability, Maleficent proves to be a box-office home run for both children and adults in the recreation of Sleeping Beauty with a twist.

Viewers will not be able to look away at this re-told fairy tale classic as it shows new dimensions and insights into the once evil character of Maleficent. The journey she goes on is irreversible and filled with some of the best cinematography put on screen in a long time.

Maleficent grows from a child fairy to an adult and gains a sense of eagerness for revenge against her once childhood beloved one due to an unexpected turn of events that causes an extreme distrust between the fairy land and the human kingdom. This forces Maleficent to take revenge against the new king and place a curse on the young Aurora, who is then sent away to live with the three enchanted fairies until the age of 16. Meanwhile, Maleficent’s heart starts to soften while keeping an eye on the young Aurora and she then must go head to head with the curse she once bestowed upon the princess and her empathetic heart.

What Makes This Movie Different than the Modern Version?

Whenever a studio takes on a huge fairytale classic, there is going to be mixed reviews. Some will complain that too much was changed or left out. In this case, Maleficent proves to be a perfect blend of a collision of two worlds, the consequences that come with evil actions and the power of redeeming love.

“It was really important to be playful with the evilness,” Director Robert Stromberg told Press Pass LA, noting that he wanted to make a film that he could take his family too. Jolie not only makes a terrifying and completely intriguing lead from start to finish, but her intense family connections off screen and her young daughter making a cameo as well, add to the tenderness the audience gets to fall in love with onscreen.

The irony of her own daughter playing the younger Aurora just adds to the heartwarming effect, which Jolie has admitted a number of times, was never planned. “We realized that there was no way that we were going to find a four or five-year-old that I could be as strong with that would not see me as a monster, and suddenly there was Vivie running around looking like little Aurora and everybody kind of thought, ‘oh, the answer’s right there,'”Jolie explains. 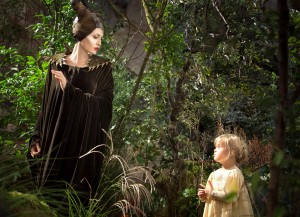 As for timing, Jolie said this could not have been a better time to sign on to this terrific Disney adventure film, with six children of her own. “I read Linda’s script and I was really moved by it and I actually got very emotional when I finished it and I thought it was one of the best scripts I had read in a long time because of the issues it dealt with,” Jolie said.

Elle Fanning also delighted the screen with a youthful innocence and spirit to Aurora. With Super 8 being her big breakout role, Stromberg declared that Fanning provided a light that differed from hiring just another beautiful blonde. “She sort of defined this bright light, she was what life is, she sort of exuded life itself,” he explained.

Regardless of the minor plot points that one might notice differs from the original, what truly stands out is the dynamic shift of the concept of love, and what true love really looks like, that might not come in the shape of a knight in shining armor. As for the critics claim that the film could be too dark for children. Jolie shuts this down, stating, “what children can handle and what they’re really interested in is much deeper than I think people assume.”