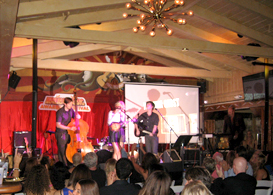 At the Malibu Music Awards held at the Malibu Inn, the only thing more eclectic than the music performed, were the guests themselves. They were decked out in an assortment of rock star attire, which ranged like a musical chord, executing tunes of Honky Tonk, to Death Jam, to Pretty Pink Pop, and all around the gamut. If you think that their dress codes explained their personality “riffs,” think again! And just by looking at them, it was clear tonight was something big. And it was.

Tonight was to be the last time Glen Campbell, famed and noted musician of countless accolades and acclaim, would ever perform onstage again. This being the fifth year of the Annual Awards Ceremony, locally renowned artists were in attendance, many of whom performed outside and some performed inside the venue. What made this an interesting event was not so much the anticipatory actions that led to the awards being given (the awards themselves were never officially “seated” for), but rather the mixer which made up the entirety of the evening.

The people in attendance chatted gleefully in the softly lit night on the patio, where food and drink took up much of the attention. This gave the spectators reason to open up to each other, discuss stories of Glen Campbell, from those who had seen him perform to those who had known him. This was the magic of the night. This was the glue that held the ceremony together. And listening to the performances only heightened the sense of the evening.

The people who performed were all in top form. They consisted of Samantha Ronson & The Undertakers, American Idol Season 9 winner Lee DeWyze, among others. There were simultaneous performances going on, one inside and one outside. This was a terrific provision for people to experience the plethora of performances in the nightʼs time. With that, the delighted attendance wandered in and out, from venue to venue, creating an atmosphere of spontaneity and resolve.

Ah, but the moment that Glen Campbell stepped onto the stage, to perform “Dueling Banjos”, the crowd went wild. His daughter and her band were present to see him through the musical piece. Despite his condition (he was diagnosed with Alzheimerʼs in 2009), he fared well in a blazing, blaring glory that shook the crowd. It was a true send off and swan song for a music legend. It was also sadly short-lived. He received his gifts, and Honorary Award in a quick fashion that sent audiences away from the Malibu Inn right after. His condition is unfortunate, and he has certainly done his fair share to raise awareness on the matter, but this should have been a bigger event.

For a final hurrah, Glen Campbell seemed to go out with a whimper and not a bang. To be expected for sure, and in any case, the occasion was still an onslaught success, gathering the attention and flare of any Los Angeles red carpet event. So when it all comes down, the Malibu Music Awards ceremony, honoring Glen Campbell felt more like the last gathering of a family reunion. Close friends were in attendance, he had his moment around the “campfire” and everybody left satisfied.

The Malibu Music Awards is a wonderful time for all people in L.A. to gather around the dine fire, have a glass of wine, and celebrate music – the universal language!