Marian Hill brought out VÉRITÉ and Shaed for a sold out Wednesday night at the El Rey Theatre.

Fresh off the release of their debut full length album, Act One, Marian Hill packed the El Rey with a night full of beat dropping, saxophone sexy music. 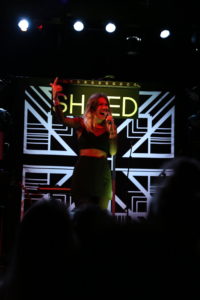 The night kicked-off with Shaed, a trio out of DC who served as the perfect compliment for a night of soulful electric pop. If you’re looking to add a song to your gym playlist, check out Running Through The Fields.

Just to send a little appreciation to the production team, the show itself ran quickly and smoothly – it is a concert-lover’s dream to have transitions that are less than 20 minutes, so thank you!

Next up was VÉRITÉ, one of the most consistent and impressive unsigned artists in the business, releasing three highly-acclaimed EPs as well as a few viral covers (most recently the 1975’s Somebody Else). Singer-songwriter Kelsey Byrne let the music speak for itself on Wednesday night, playing favorites like Weekend and Underdressed. The performance alone was headline-worthy.

The room noticeably packed out as Marian Hill’s set time arrived. One of the most beautiful things about the LA music scene is that you never know what kind of crowd will be at a show. In the case of Marian Hill, looking around you couldn’t quite pinpoint who their target audience was, but they all definitely wanted to dance.

The duo, Jeremy Lloyd and Samantha Gongol, kept everything minimal yet effective. Complimentary to their music, the stage was setup with only Lloyd’s instruments and a simple backdrop, with the lighting keeping a cool tone. Other than the addition of Steve Davit on saxophone and bass, the music was guided by Lloyd’s live production and Gongol’s sultry, smooth vocals. Gongol’s presence on stage was commanding – it felt like she was putting a spell on the crowd and her bandmates alike, willing the beat back under her vocals and weaving the melodies together in the air. The whole show felt very intimate, and to some fans on Wednesday night, became a sexy playlist for their very public make-out sessions. 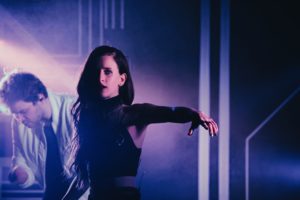 Highlights of the night included the charting hit One Time, Down, Talk To Me & Lips. If you can scour the internet for any song in particular, the slow, tension building cover of Whitney Houston’s I Wanna Dance With Somebody is worth it. Seriously, go find it.

For more images from the show, click our gallery below!