City Summit, the world-class, socially conscious business acceleration organization founded by Ryan Long, is bringing together an all-star lineup of speakers and entrepreneurs for the annual Wealth Mastery & Mindset edition held on July 10 and 11 at Allure Banquet in Van Nuys, California.

“I started City Summit so that we could have a place for our community to network and learn from each other. I noticed that simply throwing the City Gala as a stand-alone fundraiser did not maximize the exposure for our beneficiaries, so we implemented the Wealth Mastery & Mindset Summit to keep the conversation going throughout the year. Ever since its inception, the City Summit has had more multi-million and billion-dollar founders deliver massive amounts of value to socially conscious entrepreneurs. Our community gets to network and share their business techniques, tools and secrets for mastering their craft,” said Ryan Long, founder of City Summit & Gala.

For business owners and leaders, The Wealth Mastery & Mindset Summit presents a unique opportunity to network and develop relationships at the highest level. Award-winning speakers and CEOs share inspiring knowledge and education about how to overcome adversity and accomplish inconceivable goals. 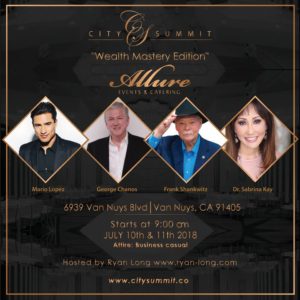 The two-day summit concludes with a party hosted by  Mario Lopez. The beneficiaries of the 2019 City Gala will be announced and honored at thecelebration and include Giving Hart, Tucker Teens & Tots, Rock Against Trafficking, Journey’s Dream, Selah Freedom, United Intentions and From Orphan to CEO.This year’s City Summit: Wealth Mastery & Mindset Edition is presented by One One 77, Brigade, Infusionsoft, 123Employee, Click and Grow Business, Charity Stars, CEO Space and Speakers Coalition.

If you can’t attend, you can still support by bidding on unique prizes including a day on the set of Extra TV with Mario Lopez via Charity Stars.