Marvel Goes Into the Mystic with Doctor Strange

Doctor Strange, the 14th installment of Marvel’s Cinematic Universe, hit big screens for the US market last weekend, while engrossing a magical $86 million overseas the weekend before.

Many may forget this is a Marvel brand movie, when they are engrossed in a world of magic, and only half-way through a two hour film, receive one reference that links it’s key character to the Avengers. Of course, upon further analysis, the film unveils prominent attributes of Iron Man, Thor, and Captain America, while focusing on the humanity behind it’s spellbound wanderer.

Viewers follow protagonist Dr. Stephen Strange (yes Doctor, not Mister), as he struggles through a journey of the rise and fall of hubris, in order to come out as this year’s next big superhero. Dazzling visual effects, that may remind onlookers of the folding scenes found in Inception, nod to it’s character’s 1963 comic book origins, bringing pride to all true fans of Steve Ditko, the character’s creator.

The movie opens in New York with hotshot super-surgeon, Dr. Strange, arrogantly displaying his skills and knowledge, proving that more than facial hair connects him with Tony Stark. Quickly his life is turned upside down, after a crippling car accident renders his hands useless. He pursues any avenue to remedy himself, including multiple experimental surgeries and physical therapy. Dipping into a very visible depression, full of anger and regret, he unexpectedly learns of a former paraplegic who has regained all his mobility.

This discovery takes him out of his comfort zone of medical expertise, and literally thrusts him into the world of mysticism, marrying science and magic much like Thor and Asgard. Dr. Strange quickly devours all knowledge he can of sorcery, with his teacher, The Sorcerer Supreme (Tilda Swinton), guiding him; all with the goal of healing his hands. But, like most heroes, he unwillingly discovers his true purpose: to help guard the world from Dormammu of the Dark Dimension, a villain of a higher caliber than the traditional megalomaniacs The Avengers have faced. Dormammu’s power is so great, in fact, that he cannot be defeated, merely deterred, which may suggest that audiences will see him again. 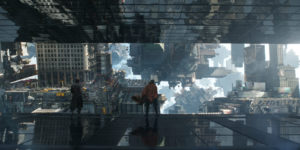 The mind-bending fight scenes in Doctor Strange raise the bar for all other movies.

Through kaleidoscope fight scenes and the help of a flirty cloak reminiscent of Aladdin’s carpet, the audience sees Dr. Strange struggling with the most basic question any superhero asks themselves, “should I use my gifts to kill?” This is the moment when the audience learns of the humanity that is in Dr. Stephen Strange. Although he refused patients who would be risky for his career in surgery, although he often flaunted his success, although he proudly advertised his photographic memory, he lived true to his Hippocratic oath: do no harm. This code, which connects him to all heroes, also climaxes the cinematic production into a rather humorous space-time warp, to save the world. That act of self-sacrifice and honor mirrors that of Captain America, finalizing the invocation of the best components of our Marvel Universe heroes.

The immaculate cast, which includes a no-frills librarian named Wong (Benedict Wong) and a seriousness and burden filled apprentice named Mordo (Chiwetel Ejiofor) who comic fans are sure to guess his fate, creates depth and laughs for moviegoers of all ages. Also, the fantastic performance of Benedict Cumberbatch should come at no surprise. Audiences are even treated with one shirtless scene which in interviews Cumberbatch jokes was his idea, in hopes of showing off seven months of training. In contrast, Rachel McAdams is unfortunately saddled with Christine Palmer, who continues to portray the familiar trope of a love interest with no context or character depth, failing the Bechdel Test.

True comic fans, however, focused their attention on Tilda Swinton, because her casting not only changed the sex and race, but also the origin of, The Ancient One. A performance of intense eye-contact, calm demeanor, and posed strategic martial arts may win critics over, however. Swinton brought value to her complex character, and gave audiences an integration of humor and discipline.

Never deviating from the Marvel movie formula, viewers are delighted with at least 20 different Easter Eggs, a comical cameo from Stan Lee, and two-post credit scenes.  This movie, as part of Phase Three of Marvel’s Cinematic Universe, provides the necessary breathing room from the aftermath and discord of Civil War. With impossible visual effects that seem to summon M.C. Escher, Doctor Strange can only be truly appreciated on the big screen in 3-D.