Marvel Universe LIVE! made its premiere at the “Fabulous Forum” for a heroic action-packed Saturday morning this past weekend! Hollywood’s celebrity families responded to the call to save the universe with their favorite Marvel Super Hero at this live stage show.

The event will included special appearances by more than 25 of Marvel’s greatest Super Heroes, followed by the performance of Marvel Universe LIVE! featuring incredible stunts. 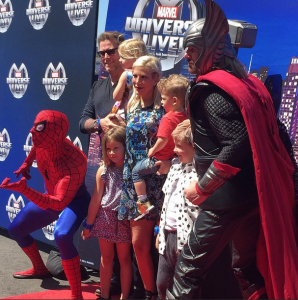 In addition, Marvel Universe LIVE! and REPREVE have teamed up to educate audiences all around the country on the importance of recycling and how everyone can help. Producer Juliette Feld presented a $100,000 donation to the Boys and Girls Club of America, to help spread the message that everyone can be a Super Hero when it comes to recycling.

The event was attended by celebrities including LeAnn Rimes and Eddie Cibrian, Tori Spelling and Dean McDermott, Poppy Montgomery, Rapper Xzibit, Antonio Sabato Jr. and Linkin Park’s Mike Shinoda, many of whom brought their kids. Check out our video interviews above with Press Pass LA host Denise Salcedo.