Marvel’s Luke Cage dropped on Netflix this weekend and became an instant cult classic. Luke Cage not only stands on its own as a gritty, urban drama but is an excellent addition to the ever expanding Marvel Cinematic Universe.

For those new to the character, Luke Cage (Mike Colter) continues the story that first began in last year’s Jessica Jones.  Now he’s hiding out in Harlem trying to mind his own business until the neighborhood gets so bad he is pushed into making a stand. Colter brings so much gravitas to Cage that every single scene of his is a treat to watch. That s says something considering how much Marvel stacked the deck with fantastic actors like Mahershala Ali (Misty Knight) and Simone Missick (Cottonmouth) in this series. 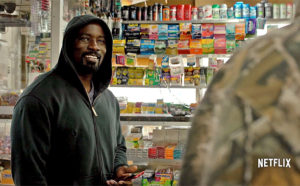 Marvel seems to be learning from every new series that it produces on Netflix.  Daredevil was groundbreaking but it wasn’t until Jessica Jones that it really tapped into serious social commentary. With Luke Cage the character becomes a hero for racial injustice in the inner city and Marvel’s New York has never felt more alive.  Each frame is full of texture and life that makes it all pop.  This is something that DC Entertainment still hasn’t quite mastered. While their CW shows like Arrow, Flash and now Supergirl are fantastic nothing about that world feels lived in, it’s just too clean. Marvel throws all that away by shooting most of their series on location and letting the city do its thing. The end result are streets that feel alive and characters that, no matter how little screen time they get, feel genuine. 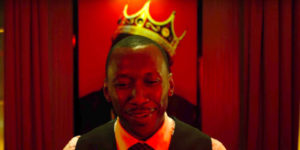 An ongoing complaint with among Marvel properties is that they have weak villains. Three series in that rule doesn’t seem to apply to its Netflix universe.  Ali’s ruthless Cottonmouth is so damn good that it is hard not to be enthralled. Not since Loki has there been a villain that is so charismatic the audience lets him get away with all of his atrocities because he’s such a complex character.  Let’s hope we see more of him in the ever expanding universe.

As good as the series is though not every episode knocks it out of the park, but that’s understandable.. Cage builds so much good will that even moments of silliness, like trying to get him into his original costume from the 1970s, get a free pass. In weaker shows some moments might be considered jumping the shark, but the levity helps the narrative.

Thankfully this isn’t the last we’ve heard of Luke Cage. Fans can expect to see him in the upcoming Iron Fist series and in Netflix’s upcoming Defenders, an Avengers like team-up event which, given the success of each of its shows, is going to be epic.