THE MASTER- JOAQUIN PHOENIX AT HIS BEST 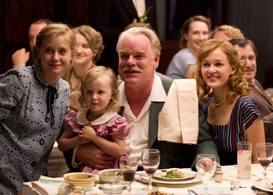 When Lancaster Dodd, the charismatic leader of The Cause in Paul Thomas Anderson’s latest film The Master, meets alcoholic naval veteran Freddie Quell for the first time, Dodd admits to him that he is simply a “hopelessly inquisitive man.” Audiences will likely feel the same after embarking on Anderson’s latest journey, a fantastic, disjointed character study of the highest caliber.

The film opens at the tail end of WWII when prosperity, peace, and a heightened sense of optimism were flowing through America. But for some, this time was far from paradise. Joaquin Phoenix gives the performance of his career as Freddie Quell, a sex-deprived alcoholic who stumbles into post-war America, the stresses of war having worn him thin. He loses his job as a mall photographer after assaulting a customer and takes up cabbage picking, where he is chased away when a farmer grows ill from drinking too much of his homemade moonshine (aka paint thinner). Freddie sneaks on board a party boat, where he meets Dodd, who welcomes the helpless vet into his family. He attempts to cure Freddie of his vices, taking him under his wing like a son. Through countless therapy sessions, Dodd works with Freddie on controlling his hostility, channeling his emotions, and exploring his inner demons. As we see him work with Freddie, we witness the power of a teacher with absolute conviction and the ability he has to create a sense of order in a world of uncertainty.

The film is textbook PTA as we follow the evolution of a sect and the skepticism that threatens to expose its absurdities and tear its foundation apart. Paul Thomas Anderson brings his signature style and tone to the film, which is beautifully shot in 70mm by Mihai Malaimare Jr., a new cinematographer for Anderson, whose work was previously shot by Academy Award winner Robert Elswit (There Will Be Blood). As he does with many of his films, Anderson is able to transport the audience to another era, capturing the look and feel of 1950s America. Every shot in this film is absurdly beautiful and audiences should strive to see it on the big screen if possible.

The film carries many of the themes present in Anderson’s films: an aimless main character being influenced by an omniscient mentor with ulterior motives; greed and avarice overtaking moral responsibility; a search for meaning in life. The film feels most reminiscent of There Will Be Blood as the perverted father-son relationship between Dodd and Freddie is a near match for that of Plainview and Sunday.

The film’s performances are nothing short of spectacular, with Phillip Seymour Hoffman delivering a brave portrayal of Lancaster Dodd, who has been often compared to L. Ron Hubbard despite the film being entirely fiction. Amy Adams gives a memorable performance as Dodd’s overbearing wife. Laura Dern, Ambyr Childers, Rami Malek, and Jesse Plemons round out the supporting cast. But above all else, Joaquin Phoenix steals the show, delivering a loose cannon performance with raw intensity that should easily put him in the running for Best Actor at next year’s Academy Awards. The film has already won Best Actor awards at Venice Film Festival and should be on people’s radar during awards season.

Despite all the accolades this film will receive, however, it won’t be for everyone. Like an expensive meal at a four-star restaurant, the film is sumptuous to take in and savory to the last bite, but may leave some viewers feeling empty and looking for more. Anderson has crafted a film that will leave audiences scratching their heads, but that feeling of inquisitiveness should make this a film people will talk about a for a long, long time.

The film opens in limited release on September 14. Watch the trailer here.