MATILDA THE MUSICAL AT THE AHMANSON THEATRE, REVIEW

Press Pass LA had the opportunity to attend opening night of Matilda The Musical at the Ahmanson Theatre and it was by far one of the best plays we’ve seen all year! 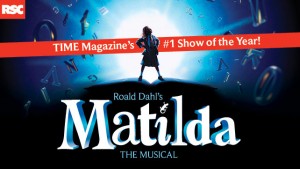 Winner of 50 international awards, including four Tony Awards, Matilda The Musical is the story of an extraordinary girl who, armed with a vivid imagination and a sharp mind, dares to take a stand and change her own destiny.

The play is based on the beloved novel by Roald Dahl  and was written by Dennis Kelly, with music and lyrics by Tim Minchin. It continues to sell out Broadway audiences of all ages nationwide and in London’s West End.

The play is running at the Ahmanson theater from May 29th through July 12th. Set and costume design for this run is by Rob Howell, choreography by Peter Darling, and directed by Matthew Warchus.  The role of Matilda (which rotates) was played by the adorable Mia Sinclair Jenness at the performance we attended and she certainly stole our hearts! The evening also included a standout performances by Bryce Ryness as the evil (but hilarious) headmaster Miss Trunchbull, Jennifer Blood as the kind Miss Honey, and Cassie Silva and Quinn Mattfeld as the despicable (and outrageous) Mr. and Mrs Wormwood. Supporting stars included Jaquez Andre Sims Rudolpho and Ora Jones as librarian Mrs. Phelps, both adding humor and charm to this world seen through the eyes of a child. 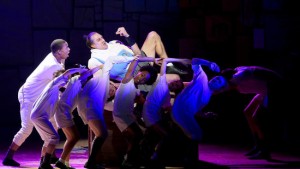 The play follows a precocious and gifted 5-year-old who reads Dostoevsky in Russian and does high level math all while her parents browbeat her for not watching enough television! In fact, her mother is more concerned with preparing for a ballroom dancing contest and her father is focused on making a quick buck as a car salesman (imagine a real life BeetleJuice-eqsue man at your local dealership), all while adoring  her completely dense brother. Meanwhile at school, Matilda must deal with the monstrous headmistress who punishes all the students on a whim while holding tight to her legacy as a one-time Olympic hammer throwing champion and dolling out ridiculous activities in Physical Ed. Fortunately, there’s someone on the faculty who recognizes just how special Matilda is!  Her teacher Miss Honey takes Matilda under her wing and is eventually forced to face her own bullied past.

This play is perfect for all ages! You can’t help but fall in love with Matilda, the music, and the spirit of this musical.