All the A-List ghouls and gals came out to play in a mansion fit for the Fresh Prince of Bel Air, to Maxim Magazine’s official Halloween Party.  Karma International produced the event, partnering with Stoli Vodka and Carnivore Cabernet to keep everyone’s cup full with tantalizing libations. 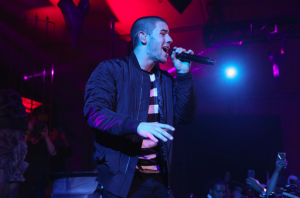 After celebs posed on the red carpet, they were whisked off to VIP area where The h.wood Group’s Blind Dragon Ballroom provided delicious dishes by ROKU, later capping off their sweet tooth with bites from Bella Donna Sweets.

The grounds of the mansion had headstones sprawled about to give you a feel of walking through a cemetery.  I was nervous that a hand might actually pop up and grab me by the ankle!

There was something at every corner of this event- a fun photo booth so you could brag to all your friends (#bestpartyever) and once you entered the doors….a Haunted House maze!  I don’t know the girl’s name in front of me, but thank you for allowing me to grab your arm and scream expletives in your ear the entire way without getting mad.  You’re the real MVP! 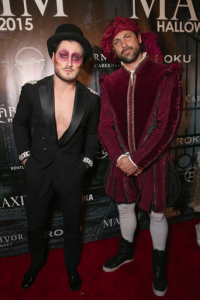 Just when you thought the night couldn’t get any better, chart topping heart throb Nick Jonas really got the crowd hyped performing smash hits like “Jealous” and “Levels” that we all sang along to.  From the wonderful staff, whose hair and makeup looked impeccable thanks to The Organic Face and SB boutique Salon, to the spectacular layout with Floral arrangements provided by Four Seasons Florist, absolutely NOBODY wanted the party to end!

Everything was top notch and other famously known bashes (ahem…we won’t mention any names) should be worried because there is a new King of Halloween.