We’ve all heard this story before. A Caucasian man moves into a minority-filled neighborhood, takes a few kids under his wing and changes their lives for the better, all while over coming cultural differences. Despite this overall story being somewhat clichéd, Director Niki Caro was able to present this formula in its most realistic form with the movie McFarland, USA.

Based on the 1987 true-story, the film focuses on Coach Jim White, played by Kevin Costner, moving to McFarland, CA to teach at the local high school and coach football. The desolate town resides in central California where agriculture is the main heartbeat behind the Mexican-American community. The culture clash between the White family and McFarland is obvious from the very beginning. On their first night in town, the White family finds a Mexican mural in their living room, receives a chicken as a welcome gift and can only find tacos for dinner. 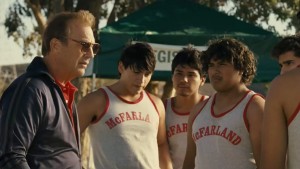 Although these may seem like silly cultural differences, they are presented with taste. The reactions are transparent, but never over exaggerated. Trying to be respectful while being thrown into a culture shock, the White family quickly adapts to their new hometown.

After butting heads with some of the high school’s personnel, Coach White realizes that he has an opportunity to bring a whole new sport to McFarland. He brings together a group of seven runners for the town’s first-ever cross-country team. Many of the runners are actually portrayed by real-life McFarland natives, due to open casting calls in the area.

A real stand out was seasoned actor Carlos Pratts who played the reluctant, yet talented runner Thomas Valles. Through many emotional stand-offs with Coach White, Thomas begins to realize that his future as a picker isn’t set in stone. Rather than being a preordained field worker, the runners learn that they have a choice in what their futures entail.

Costner described the role of Jim White as a, “beautiful thing. Relationships that coaches establish with young people is something that carries [throughout] their life if it’s done right. There’s not a lot of Jim Whites, but there are Jim Whites, and he represents the best, really, of the best.” Costner assumes this relationship perfectly as both Jim White and himself. The movie shows a caring coach who is willing to welcome seven players into his own home as he tries to change their lives for the better. Concurrently, Costner acted as a mentor for many of the first-time and even seasoned actors.

The real reason this movie is not over-played as many of its predecessors is because of Director Niki Caro. She was able to capture the nitty-gritty atmosphere of this rural town without bringing in bright Hollywood lights and unauthentic roles. “I was really inspired by the people,” stated Caro, and “by the commitment to their families, their faith, their community. I get a big kick out of it, actually, working with real communities. And this is a real story, it really is.”

Caro even went as far to say if, “you drive to McFarland, you’ll see a bunch of people you see on screen.” This quote rings true as the movie shows the giant mounds of fresh almonds, fields of oranges and various workers who live in these surrounding communities. It’s because of this truthful depiction that I recommend viewers to see this movie. Chances are, you’ll find it entertaining, heart warming and inspiring.