A bevy of celebrity guests gathered on the rooftop of the London Hotel in West Hollywood Friday night to celebrate the 15th anniversary of Mercy for Animals, a non-profit organization renowned for its undercover investigations exposing animal cruelty in slaughterhouses and farms. 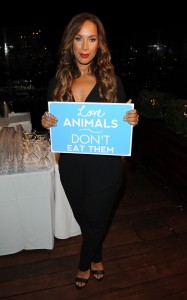 Wearing a vintage floor-length Versace with a plunging neckline, Anderson looked stunning as she received the Sam Simon award, named for the co-creator of The Simpsons who is a renowned animal rights activist.

When asked what Mercy for Animals and this award meant to her, Anderson replied, “Everything. I have been working with them for a long time. They are the ones getting the undercover footage. It is not the most glamorous part of the job. I don’t think there is a glamorous part of the job. They are just really great and interesting people who are able to expose the things they need to.

As he accepted the evening’s Compassionate Leadership award, Moby predicated a time in the future where nearly everyone would practice a vegetarian diet because of it’s health, humanitarian and environmental benefits. 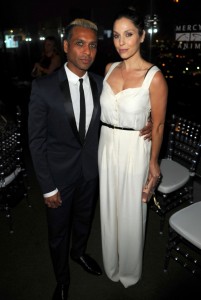 As the sun slowly set, guests mixed and mingled poolside. They then migrated to the candle-lit outdoor dinning area where they sipped Vegan Vine, a collection of wines made completely without animal products. On the menu was a coal roasted beet salad and delicious Gardein meatless-meatballs and polenta.

As the invitees admired the twinkling lights of the city below, John D’Amico, the Mayor of West Hollywood declared that his city was one of the most progressive cities in the nation on this issue. He then pledged to continue in his unwavering support. 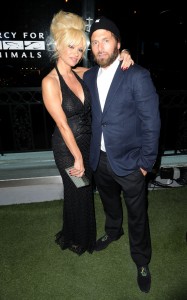 Friday night’s anniversary gala proved to be a rousing success for MFA. The evening’s silent auction raised over a million dollars for this worthy cause. For more information about Mercy for Animals and how you can help, please visit www.mercyforanimals.org and follow them on Twitter and Instagram—@MercyFor Animals.