Timed to the upcoming release of Michelle Obama’s memoir, Becoming, the former first lady will be making an appearance Thursday night on ABC’s Jimmy Kimmel Live!

Obama’s book was recently selected as Oprah Winfrey’s next book club choice, marking Winfrey’s first pick of an author from the political world since she started her club in 1996. 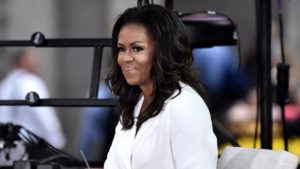 In Becoming, Obama candidly shares personal revelations about her life, such as suffering a miscarriage, and also sharply criticizes President Donald Trump. The former first lady’s book will be released to bookshelves on Tuesday via Crown Publishing, a part of Penguin Random House, and is among the most anticipated political memoirs in years, having already topped Amazon.com’s best-seller list over the weekend. The memoir is projected to sell millions of copies and is being published globally in 31 languages.

Ahead of her late-night appearance, Obama recently sat down with Winfrey for an in-depth conversation that will be released across multiple platforms this month.

In their candid conversation, Obama spoke about the life experiences that have shaped her, including her childhood on the south side of Chicago, her years working as an attorney and executive in that city and how she worked to balance the demands of her career and raising two daughters.

She also opened up about the challenges she and Barack Obama endured during the early years of their marriage, including undergoing counseling and facing the pressure of being the “first black family” to live in the White House.

The conversation will air as a primetime special on Winfrey’s OWN network on Thursday at 8 p.m. ET/PT. An extended, unedited version also will be available on the Oprah’s SuperSoul Conversations podcast starting the same day, with part two available on Nov. 19. In addition, the full interview will be streamed on Oprah’s Facebook page on Nov. 18 at 11 a.m.

To celebrate the release of the memoir, OprahMag.com is posting an exclusive excerpt of the book.

“This book is everything you wanted to know and so much you didn’t even know you wanted to know. I believe it’s going to spark within you the desire to think about your own becoming,” Winfrey told the Associated Press. “It’s so well-written I can hear her voice; I can hear her expressions; I can feel her emotion. What she allows us to see is how she was able to discover, define and then refine her voice.”

To further promote the book, Obama also sat down with Robin Roberts for a 20/20 special on ABC on Sunday.

Obama is also embarking on a 10-city book tour, which kicks off Tuesday in Chicago. During each tour stop, she will be interviewed by special guests including Valerie Jarrett, Reese Witherspoon and Tracee Ellis Ross.

Obama is also set to make appearances this week on The Ellen DeGeneres Show, Good Morning America and CBS This Morning.

The Associated Press contributed to this report. ** This article first appeared on THR