When I read Lionsgate and Saban Brands would be re-envisioning the Mighty Morphin Power Rangers brand and bringing it back to the big screen, I did what any die-hard fan would do—I grabbed my power morpher and dragon dagger, jumped on my bed and screamed “It’s Morphin Time!” 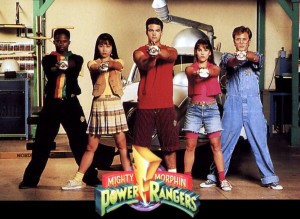 OK, so I didn’t do all that, but I did jump for joy and scream in excitement — just ask my co-workers. But, with all of the recent 90s nostalgia making a comeback, I wasn’t completely surprised. In June 2011, Netflix began streaming every episode from the show’s tenured history. And, due to overwhelming success and fan support, Shout Factory released the first seven seasons on DVD in 2012. The following year, Power Rangers celebrated its 20th anniversary with new merchandise and the re-release of classic toys like the power morpher, dragon dagger, zords and more.

Fans even started making their own Power Rangers movies. The fan film “MMPR” raised more than double its goal on Kickstarter in 2013. The movie is still being filmed, but its success might have led Saban and Lionsgate to fully realize the fans’ desire to see five extraordinary teenagers with attitude return to the big screen.

Now that an official movie is in the works and a release date – July 22, 2016 – has been set, attention turns to production elements such as plot and character casting. Many fans are worried what story will be told and if the new film will do the original franchise justice. Will it just be an excuse to show off new special-effects technology with scenes of mass destruction? And, even if a good story is planned, who will be cast to tell it?

I don’t see a need to tell the entire saga in a single movie, nor do I feel Lord Zedd should be featured as the team’s first foe. While Zedd is, by far, the most popular villain of the series, moviegoers need something to anticipate. If this is intended to be a true reboot, the story should begin as the original series did, with evil witch Rita Repulsa and her band of minions released from a space dumpster on the moon.

As demonstrated with the Star Trek reboot, the original story can be freshened up, but combining multiple villains such as Rita, Zedd, Rito Revolto and Master Vile into a single movie would be a mistake.

The film should focus on the five central teenagers meeting Zordon of Eltar and Alpha 5 trying to stop Goldar and the Putty Patrol, working under Rita Repulsa while she attempts to conquer the world. Zedd and the destruction of the Command Center can be saved for a later installment.

One element that could be adapted for the first movie is the introduction of the Green Ranger. Many would say the Green Ranger – later the White Ranger – played by Jason David Frank, was the series’ most popular star. The character proved to be so liked, in fact, it had to be rewritten into the series after the Green Ranger died in the “Super Sentai” series, from which Power Rangers drew its inspiration and action footage.

And who could forget the supporting cast members like Bulk and Skull or even Ernie of Ernie’s Juice Bar. Cameo appearances by secondary characters such as Ms. Appleby and Mr. Caplan would be nice Easter eggs for long-time fans.

Returning to the question of casting, one has to wonder if original cast members would be involved. Many fans want the originals to reprise their iconic roles, but they were in their 20s during their first run, which creates even more of an age disparity now. There is certainly nothing wrong with including the surviving original cast; in fact, a true 20th anniversary reunion would be great, but it might be detrimental to idea of a MMPR reboot film.

Who exactly would play the new rangers? Names such as Liam Hemsworth, Taylor Lautner and Ashley Benson have been suggested as candidates to don the colored spandex. Some fans have even suggested Patrick Stewart for the role of Zordon, but, while I personally would freak out, don’t hold your breath.

We are still a few months away from casting and plot development news, so there is no need for Ranger Nation to get too wound up this early. These companies still have plenty of time to ensure they do this project the right way. But one thing is for sure; thanks to the dedication of a loyal fan base, the Power Rangers are back, and that is truly Morphinominal.

May the power protect you.