Mike and Dave Need Wedding Dates makes a familiar plot within the comedy genre their own as it incorporates elements from the modern-age to drive its plot.

It has a Wedding Crashers vibe, with a hint of influence from a Judd Apatow production sprinkled on top. Yet, the film is worth reaching into your wallet to hand over your money to your local movie theater because it is genuinely hilarious.

The film revolves around Mike (Adam DeVine) and Dave’s (Zac Efron) search to find the perfect dates to their younger sisters wedding, as an attempt to tame them for the weekend. After the brothers post an ad on Craigslist, it generates media buzz–that’s where Tatiana (Aubrey Plaza) and Alice (Anna Kendrick) come in. The girls formulate a plan to get Mike and Dave to take them. But in typical movie formulaic fashion, Alice and Tatiana prove to be the exact opposite from the nice girls they appear to be. All in all, chaos is in store during the exciting and raunchy ride that is Mike and Dave. 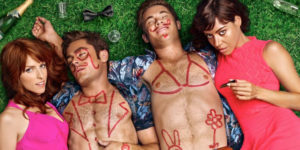 With an all-star cast, all well liked amongst the younger demographic the films targeting, they manage to provide a sense freshness to the film. A large part of this freshness is courtesy of the ensemble casts chemistry. This is one of the things that work well within the film to sell the believability. This most unbelievable thing within the film is when Efron attempts to pull off an Australian accent, but we will let it slide because we love him anyways.

As a major highlight, Plaza proves to be a scene-stealer as she teams up with her best friend, Kendrick. Together, the dynamic duo shows the audience that girls can party just as hard, if not harder, than guys. Not to mention, the infamous besties possess impeccable comedic timing throughout the films entirety.

Another thing that works well for this film is its element of surprise. It’s very common for films to have some aspects of predictability. Now, Mike and Dave follows through on that to a point. However, it manages to throw curveballs to its audience that work. Various moments will either have you laughing uncontrollably because you’re shocked, or a combination of squirming and giggling because you don’t know how to properly react. Don’t worry; we won’t be the jerks that spoil the movie for you! You must see it for yourself.

The only setback this film possessed stems from one character in particular: Terry, Mike and Dave’s cousin. Unfortunately, Terry (Alice Wetterlund) is an annoying character with the dialogue to match it. The so-called “funny moments” and jokes within Wetterlund’s dialogue often fall flat. But, the actress isn’t to blame—her character was given poorly written lines.

No, Mike and Dave doesn’t necessarily have a perfect script. But, the vast majority of the content within the script works through the help of the all-star cast—the films trailer doesn’t do it justice.

Mike and Dave Need Wedding Dates is a must see movie this summer opening July 8!