MIKE RUSHNAK’S ‘UNSEEN SHADOWS’ ASKS WOULD YOU LIVE FOREVER IF YOU COULD?

Michael Rushnak has released his latest medical mystery Unseen Shadows, after the previous success of his first three novels which were a trilogy. In Unseen Shadows, Rushnak takes on the implications of what a life-lengthening technology would mean to the world.

Rushnak’s novel begs the question “Would you live longer if you could? ” but the answer is not as simple as one might think.  And it is not so far-fecthed considering Google’s recent investment into the life technology company Calico whose aim is to “beat death.”

The novel also delves into how such a powerful technology would play out in the global space. Both at home, with the medical system and costs of health care, and overseas with various nation’s fighting to control such a powerful commodity.

One need only whisper the words Obama Care right now to stir a reaction among the average American, political or otherwise. While Rushnak’s work may be fiction, it is grounded in the topical hot buttons of today, and adds the entertainment value of a classic thriller-mystery.  Check out our interview with the author below.

PPLA: Since we last spoke, your latest book, Unseen Shadows, has been released. Give us a little background on that.

MR: In Unseen Shadows, the story focuses on what would be the greatest scientific innovation of the 21st century–the unbelievable genetic engineering of our cells. This achievement would lead to a superior quality of life and a longer life span. In my novel, the characters play out the tension and conflicts that will surface when this technology becomes available in the coming years. Who will have access to a scientific treatment capable of helping us to live longer healthier lives? Are we playing God in intervening in the basic genetics of life itself? Will the secret formula created by American scientists drive foreign nations to engage in deadly international espionage to do whatever is necessary to obtain the coveted technology?

PPLA: What do you think makes your stories a success?

MR: The essence of a good story, especially a mystery thriller, is an escalating conflict between characters as the plot unfolds. A lot of readers, in their reviews of all my novels on Amazon and Barnes & Noble, have described my books as faction even though they are actually fiction. Many readers refer to my novels as faction because they contain kernels of truths and real life realities which informs the reader of important topical issues. I believe my stories have been highly rated because readers can readily identify with flawed true to life characters who appear so real that when something happens to them, readers are moved through a range of emotions. As each character faces difficult choices and risks to their lives, readers feel for the characters, moved to tears when the “good guys” are murdered, and cheering when the evil doers are taken down.

PPLA: What are your feelings about the status of the American health system right now? How does this play out in your book?

MR: Unfortunately, the medical sickness model in America depends far too much upon treating illness and not nearly enough focus in preventing illnesses. However, there is good news. Certainly my children and my grandkids in their generations are much more knowledgeable than my generation ever was on what’s actually healthy and good to eat, and what you should avoid. As a physician, I believe that we should be craving wellness, not just treating sickness. Needless to say, I became very interested in prevention and why we’re not doing it as well as we should in America. So, I started reading many books on this topic. One book in particular discussed the mapping of the genetic code which was completed in 2003. Today, scientists know what the human genome looks like. They found that there are about 25,000 of these proteins called genes that control whatever happens to the 1 trillion cells in our body. Imagine it; it’s unbelievable! 1 trillion cells that make up our body use 25,000 proteins that control everything that goes on in our bodies. So my research began. I spoke to highly regarded doctors including geriatricians. I began to learn so much. One interesting point is that people who are living much longer lives more often than not had one particular gene called the FOXO Gene. I started to delve more and more into the issue of “good” genes vs. “bad ” genes . I began to look at the ways that scientists today are trying to turn the good genes on and turn the bad genes off, in simplest terms. I actually came across something that Google is doing right in California with a company called Calico.

PPLA: I actually read about that, ironically on Google. Basically, they are trying to defeat death, right?

MR: That is apparently their goal. Larry Page, a co-founder of Google put a billion dollars of his own money into Calico with the goal of hiring scientists to intervene at the genetic level to substantially expand our life span. Last fall, there was an article in Time Magazine about Calico. I started to read all about that company and I started listening to a very well known scientist. He’s a bioethicist and a bioengineer, as well as a public speaker named Deepak Chopra. He talks about how our mind can influence the expression of our genes. I also came across this survey that had been done by the Pew Institute, similar to a Gallop Poll, of American attitudes toward scientific interventions to increase our human life span. It was very interesting because most Americans when asked the question, “Would you like to live a high quality life more than 100 years old,” answered “No.” Frankly, I was somewhat surprised to hear this belief. In the survey, a majority of Americans replied that although they thought their neighbors or friends or family might say ‘yes’ they personally wouldn’t do accept any scientific intervention to increase their life span or even the quality of the lives.

PPLA: I can understand those concerns. My own Grandparents, who are both 90 years old, always say they have outlived all of their friends and that is sad.

MR: Yes, probably the worst thing would be to live to be 100 years old or longer and to be all alone. Imagine if you had no friends or family, and you were 105 years old and pretty healthy but everybody that you knew in your entire life was gone.

PPLA: That would be a tough thing. So this becomes the premise of your book then.

MR: The premise of the book , with all that lengthy background, is about five married couples living in Princeton, N.J. The main character is Dr. Brandon Keifer He’s a gerontologist; a world class scientist. Brandon is working on a project called project immortality to unlock the genetic code to life. His mission as Chief Science Officer of the Aging Biologic Enterprise is to increase longevity for people that get his proprietary treatment. To be clear, we’re talking about not just a couple of years longer life span but a significant length. I don’t want to give away how he came to be working on this, no spoilers. Brandon is married to an international currency trader named Allie. He is also a pilot of his own single engine aircraft and he flies his wife to Jekyll Island, off the coast of Georgia. It also happens to be his 43rd birthday celebration. When they get to their beach front cottage, Brandon is surprised to see four couples, their closest friends, who he has known since his undergraduate days at Stanford. The evening ensues until one of the couples starts arguing to the point of physically fighting amongst themselves during the party. They storm off the beach. After midnight, the party winds down. Allie and Brandon go to bed. He wakes up in the middle of the night to find that his wife is missing. Brandon is frantic and he searches the beach. He soon finds her cell phone which reveals that she made a phone call to one of her friends, Julie, who was at the party. But Julie vehemently denies that she ever spoke with Allie. And, so it begins. The story begins in Princeton, moves to Washington DC, to London, to Russia, to Tel Aviv as covert CIA agents fight tooth and nail to preserve or destroy the secret formula that Dr. Kiefer developed.

PPLA: I think your readers enjoy your novels because they always begin with real life circumstances, for example a birthday celebration, and then suddenly take a turn for mystery while incorporating factual medical information throughout.

MR: Exactly. What drives the whole story is the fact that the four couples are very down to earth relatable people. They’re all professionals. But, they all have dark secrets that Brandon doesn’t know about. Just as in real life, people you think you know well for years may have secrets that will one day shock you. In Unseen Shadows, these secrets are pivotal to the plot. All the while, Brandon is working on a scientific project that will probably be Nobel Prize worthy as the greatest medical discovery of the 21st century. Imagine how many people in the world, and not just in our own country, would be interested in a life lengthening treatment. But, there would be ethical firestorms and fierce political battles–all played out in Unseen Shadows.

PPLA: I can see how it will definitely be controversial, and why it will certainly make for an interesting medical novel!

MR: Absolutely. One of the mysteries is how the true intentions of each of Brandon’s personal relationships are revealed, how most people are not who he thought they were and even how some life long friends have evil motives for their interest in his scientific work.

PPLA: When and where is the book available? 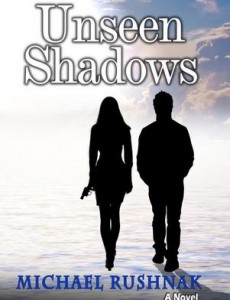 MR: You can purchase Unseen Shadows at MichaelRushnakBooks.com and also on Amazon and at Barnes & Noble. It is available in soft cover print and e-Books through Kindle and the Nook. My first three medical thrillers- Terminal Neglect, The Savior Vaccine, and Denied were all part of a trilogy so this book is the first breakaway from that. All new characters appear. My fans have found it equally appealing to the trilogy. So far the reviews on Unseen Shadows have been all 5 stars raves.

PPLA: What’s next from Unseen Shadows?

MR: I’m either going to write a sequel to Unseen Shadows and further that story or author another book about the high tension wire conflicts in the complex world of medicine. Even though the main mystery is solved in Unseen Shadows, there are still many unanswered questions at the end of this book. I could pursue a thrilling sequel if my fans on social media want it. But wherever my decision, my storyline themes are my own unique recipe–my own brand of secret sauce!