It’s official! This year, MTV’s Video Music Awards will be one for the books as Miley Cyrus takes on the role as the shows host. PPLA fans, this is serious.

With the controversial former Disney star hosting this years’ show, the audience will never know what to expect. However, that might be a good thing! As you may recall, Cyrus put on a memorable performance at the VMA’s in 2013—an infestation of teddy bears and twerking. If her hosting gig is anything like that performance, this year’s VMA’s will definitely be unforgettable. 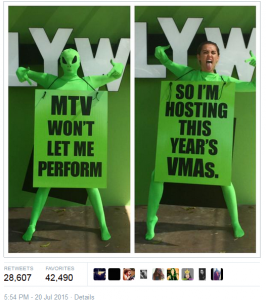 Alongside this huge announcement, MTV has released their VMA nominees. We are happy to see that Taylor Swift, Beyoncé, and Sam Smith earned their well-deserved nominations. However, we are surprised to see that artists like Carly Rae Jepsen—a past VMA nominee—have been neglected this year.

Are you excited to see Miley Cyrus host this years VMA’s? We can’t wait to see what crazy shenanigans she will bring to the table! However, do you think any artists were snubbed? Leave your comments below.