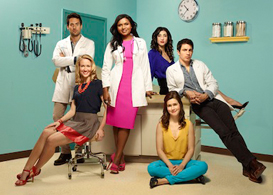 One of the magical things that the Internet and Hulu have brought to the masses is the ability to watch select pilot episodes before they air on national TV. Thanks to this much appreciated internet trend, The Mindy Project is available for streaming on Hulu. Here is our ‘advance review’.

The new sitcom stars Mindy Kaling, best known for her role on The Office, as Mindy Lahiri. Mindy is a single, 31 year old OBGYN who is struggling with the path her life has taken. Especially her love life or rather lack of one. She is obsessed with romantic comedies and is certain that she will end up with her happy ending as well. She is also finally ready to change things…or at least try to!

The show opens with Mindy in a police precinct being asked to tell the story of why she got arrested. As a result, most of the first episode is told through flashbacks and recounts of everything leading up to her arrest. Not to spoil any of the important plot points but some hints involve a swimming pool, a broken elevator, a bicycle, and a big speech. Intrigued? You should be!

The Mindy Project is well written, paced well, has a great cast of actors, and has genuinely believable and funny situations. Everyone has at least one friend who struggles with becoming a real adult, or they struggle with realizing that some of their dreams didn’t come true. This particular show is just putting it all out there in a relatable and comedic way.

It also is the sole reason why I will have M.I.A.’s Bad Girls stuck in my head for the next three days thanks to a memorable montage in the show. If you don’t have time to watch the pilot before the national air date, definitely set your Tivo or check it out when you can online. The season promises guest appearances by other comic actors who have worked with Kaling in the past including Bill Hader and Ed Helms. With that being said, it’s at least worth a look.

The pilot is set to air this Tuesday September 25th at 9:30PM on FOX. Visit The Mindy Project