Film aficionados know that one does not simply see a film. Cinephiles experience. This concept is what makes Mini Cinema so special. Five times a year Beverly Hills has the pleasure of hosting the screening of critically acclaimed short films as well as documentaries.

“Mini Cinema was founded on the single premise that short films can and should be seen as a viable commercial form of entertainment alongside Feature Films and Television Shows. ‘Our goal as a brand is to always represent the excellence of storytelling while delivering the BEST Short Film Experience to anyone who is a fan of cinema.’” -Mini Cinema Team

The vibrant Leo Breckenridge hosted this evening’s event with enthusiasm, making sure the audience did not forget that this was in no way a festival, but indeed an experience. For their first awards ceremony in December, Mini Cinema broke ground by teaming up with Apple’s business division to workshop an entire evening of visual presentation via iPad. No quality was sacrificed with the utilization of 1080p Hi-Resolution theater projection, and the team is thrilled to announce that all future screenings will be projected in this manner.

Here are the films that were screened last week: 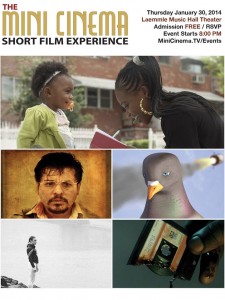 The Heat, Short documentary Directed by Chris Eversole chriseversole.com “Somebody said I can’t do it, so I’m gonna do it”—Heather Hardy. The true story of a young New York mother (Hardy) who boxes to provide for her family. The film is well shot with a great eye for color and lighting.

Pigeon Impossible, Animated short Written, produced, and directed by Lucas Martell. The cleverly humorous tale of a CIA rookie who must try to fetch back his nuclear briefcase after it is taken hostage by a smart-ass pigeon.

Busted on Brigham Lane, Short Written and directed by Talibah Lateefah Newman Produced by Demond Robertson, Talibah Newman, and Paula Rodriquez Cast: Susan Heyward, Pernell Walker, Rob Morgan. Prior to her eighteenth birthday, MoMo spots the father who long ago abandoned her family and attempts to reconcile a relationship with heart wrenching results.

Save the date for Mini Cinema’s next screening on March 27, 2014 and be sure to catch the recap video from January 30th! For more info, visit MiniCinema.TV