The film Mississippi Grind is a suspenseful journey into the dark side of the gambling world. Directors Ryan Fleck and Anna Boden’s film starts the dramedy with a rainbow in a field. Perhaps a reminder that there can always be silver lining in any situation.

Shot in casinos throughout the South, the film revolves around Gerry and Curtis eloquently played by actors Ben Mendelsohn and Ryan Reynolds. The dynamic duo meets at, you guessed it, a poker table.

The audience is first introduced to Gerry, in his car listening to audio of poker techniques. As a divorced real estate agent, we learn his problem with gambling is what keeps him deep in debt. The situation becomes so dire, that his debtors even threaten to visit his workplace and his home for their money.

Enter Curtis, as a mysterious nomad whose self-prescribed mission is to “save” underdog gamblers like Gerry. During the film, Curtis deals with his own struggles- mainly commitments of any kind. “Machu Picchu” becomes his keyword when it’s the end of the rainbow or the end of the mystery. As he proclaims, it’s the journey not the destination that is most important to him. The on and off love interest (Sienna Miller) tries to keep him grounded. But Curtis constantly battles between being mysterious or being stable. 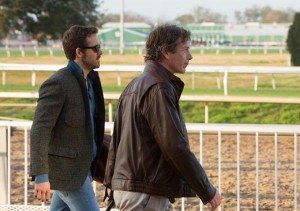 Ryan Reynolds and Ben Mendelsohn up the ante in Mississippi Grind.

As his only hope, Gerry makes Curtis an offer of a lifetime. To drive down the Mississippi to New Orleans with him for the chance to win $25,000 in a poker tournament. If he won, they would split the winnings 50/50.

Still, the film is a roller coaster of wins and losses for Gerry and Curtis. They both deal with different internal struggles and trust issues with each other. At one point Gerry confesses he has a daughter. As a result, they make a detour to his ex-wives home in Arkansas, where Gerry tells him he wants to make amends with his ex-wife and daughter.

The film is a must-see dramedy that will leave you laughing and biting your nails until the very last dice is thrown.