Patrons and supporters of The Museum of Contemporary Art arrived at The Geffen Contemporary at MOCA to honor Ed Ruscha at its annual star-studded gala!

For this year’s event, the dining pavilion erected outside of The Geffen Contemporary was transformed into into an immersive setting reminscent of Ed Ruscha’s Los Angeles-inspired “City Lights” paintings. The museum also showcased Balloon Dog (Magenta), and Balloon Dog (Yellow), a limited edition piece by Jeff Koons, produced by legendary French porcelain maker Bernardaud. Sold exclusively through MOCA, sales from this special edition have netted nearly $2 million to support the museum.

“It is with great pleasure that MOCA honors Ed Ruscha this year,” remarked MOCA Director Philippe Vergne. “For decades, Ruscha has proven to be among the most iconic, supremely influencial artists of our time and his involvement with the museum over the years has deepened MOCA’s commit 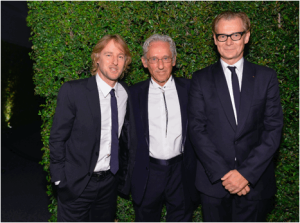 ment to being The Artists’ Museum. We are grateful for all Ed has contributed to art history, to Los Angeles, to MOCA.”

After cocktails, gala guests proceeded into a sparkling, fiber-optic adorned gala tent. The décor took inspiration from Ruscha’s iconic “City Lights” paintings, immersing guests into a dramatically lit, magical dinner. After dinner, Robin Thicke and his band took the stage and kept the crowd on it’s feet for a thirty minute set, concluding with his hit “Blurred Lines.” After dinner, guests mingled and danced until Midnight on the cocktail area which had been transformed into a nightclub under the starts complete with a dance floor and more great entertainment by DJ Balthazar Getty.