A Monster Calls is a Modern Masterpiece

A Monster Calls is one of the most powerful films of the year and we’re only a week into 2017. Based on a novel by the same name the film follows a young boy coping with hard times who accidentally summons a monster for aide. Nothing is as it seems and in doing so the film avoids the clichés of the genre, instead opening up a brand new, beautiful world for the viewer.

Our main character is Conor O’Malley (Lewis MacDougall), a pre-teen who is struggling with his mom’s (Felicity Jones) terminal illness.  When we first meet Conor he is being raised in a small town in the UK by his loving mother and emotionally cold grandmother (Sigourney Weaver). It is clear that Conor and his mom share a special bond that flows naturally from both actors. 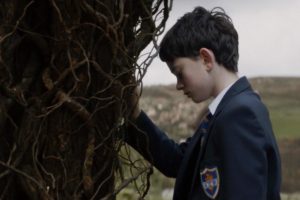 The young MacDougall is a powerhouse of an actor and plays Conor’s emotional journey in such a way that you feel all of his tragedies. Though he is still relatively new actor his range is amazing and well-deserving of an Oscar. The same can be said for Jones’ role as his ill mother. The audience watches her progress throughout the film growing ever more frail in each scene. But Jones plays her with such strength it will tug at your heartstrings.

Like Pan’s Labyrinth before it the film is very much a modern day fairy tale seen from a young child’s perspective.  Once the Monster (Liam Neeson) becomes an integral part of the story the tone shifts but not so much that it removes the audience from the action. The addition of the supernatural elements very much compliment Conor’s reality and struggle.

The only weak link in the film comes from Weaver’s grandmother character. The sole American in a cast of Brits she never quite fits into Conor’s world and her accent has a tendency to falter. But that doesn’t stop her performance from being any less powerful.  Weaver can say more with her eyes than most actresses can do in full monologues.

A Monster Calls is going to strike a nerve with many, but that’s the point.  The film follows in a long line of recent films that deal with loss through the use of fantasy. Its closest companion is the equally amazing Kubo & The Two Strings from early last year. Both films deal with some pretty major themes but handle them expertly.  If there is any justice in the world of cinema A Monster Calls will garner a number of Oscar nominations for its cast and special effects.