Montage of Heck, the first fully authorized documentary about Nirvana singer, Kurt Cobain, is a compelling portrait, revealing all of the struggles, anguish, and pain that Cobain endured.

You’re hooked right from the beginning. The film takes a deep look inside the mind of one of the “generation-defining icons.”  You see the man behind the fame and experience an intimate access into Cobain’s life with never-seen-before home movies, personal archives of art, music (some your favorites and some unreleased), Cobain’s personal recordings, journal entries, and present day interviews from his estranged parents; Cobain’s first girlfriend, Tracey Marander; Nirvana bassist, Krist Novoselic; and wife Courtney Love. Dave Grohl is absent, however; Grohl did an interview that may be included in another cut of the documentary in the future.

It doesn’t feel like a rock documentary, it feels like climbing inside Kurt Cobain’s head for a brief period of time. It is an intimate look deep inside and probably as close as you’ll ever get to the singer. You will learn things about him you never knew.

The film starts off in his earliest years in Aberdeen, WA with a montage of footage showing Kurt’s first few birthdays, family get togethers, him running around his yard dressed as Batman, all showing a young, bright eyed boy. Then you see the inner turmoil start after his parents divorce. He was bounced around homes, feeling much pain and rejection. No one could handle him and no one wanted him.

Things take a different turn at this point. Cobain’s personal journal excerpts and art are brought to life before your eyes. His extensive diaries come alive through an intense and visually stimulating animation, turning them from a still page into a powerful story; his drawings and scribbles fuse on the screen, and his personal recordings and interviews create a sort of sound montage. It feels as if you’re apart of his inner monologue. It is absolutely breath taking and cinematically fantastic.

There’s a point during his mother’s interview when she recalls hearing ‘Nevermind’ for the first time and she said to him, “You’d better buckle up, cause you are not ready for this. “

One of my favorite scenes is a haunting segment that includes footage from the filming of the ‘Smells Like Teen Spirit’ music video. A choir sings a hauntingly beautiful rendition of the track. I get goosebumps just thinking about it.

Instantly after ‘Nevermind’ is released, Nirvana is thrown into fame. Cobain describes being famous as traumatic at one point. In another interview, a journalist asks Cobain to describe the meaning behind his songs and he simply replies, “It’s all in the music.“ 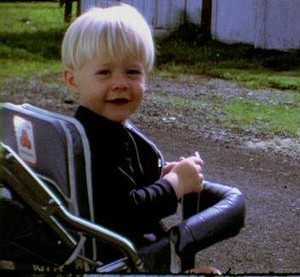 Cobain goes on retreat for six months after the immediate and crazy success of ‘Nevermind.’ Arriving like a hurricane, Courtney Love makes her appearance. Home movies document the couple in their filthy mansion, hiding out. You can see the love they had for one another, it’s a young tragic love. No explicit drug use is seen but media pieces flash across the screen, including Lynn Hirschberg’s Vanity Fair piece alleging Courtney was shooting heroin throughout her pregnancy. She even admits to it during her interview but also states she quit and that the unborn baby would be fine.

There are some light, heart-warming moments during the film as well. Surrounded by family and friends, daughter Frances Bean Cobain celebrating her first birthday, and there are special moments of Cobain playing and interacting with her, being a loving and caring father. But as the film nears the end you see Cobain’s health deteriorate and his addiction getting worse. One scene in particular during is his daughter’s first haircut; you can see visible sores on his face and body. He is completely out of it, blaming lack of sleep not drugs.

It completely breaks your heart seeing how extremely creative, full of energy, and amazingly funny, at times, this man was. Whether you’re a long-time fan or have just recently discovered Nirvana, you will fall in love with him after this in-depth look into his soul. It’s a look at Nirvana from a different angle, before the acclamation and throughout the height of all the fame.

I recommend you see it when it comes to select theatres April 24. The way director, Brett Morgan, intended the movie to be watched loud, like you’re at a Nirvana concert. You won’t regret it. Montage of Heck will also air on HBO on May 4.