THE MONUMENTS MEN, WASTES ITS TALENT

George Clooney’s The Monuments Men should have worked, it should have been brilliant. With a cast that includes Bill Murray, John Goodman, Matt Damon, Cate Blanchett, and Clooney himself it looked like a Dream Team of a cast. Sadly, the movie never fully realizes its full potential.

This is a shame because Clooney really is a great filmmaker. His debut Confessions of a Dangerous Mind proved he was more than a pretty face and had a knack for inventive direction and dialogue. While the movie does show hints of it here and there it is simply not enough to warrant the apparent Oscar buzz that has been following this movie since it was first announced.

To be fair, the plot alone should make for an exciting time at the movies. The movie tells the real life story of a group of art historians tasked with finding masterpieces stolen by the Third Reich during World War II and returning them back to their rightful homes. This job sent a group of unqualified academia smack in the heart of Europe just as the war was ending. Clooney decided to take the slow approach with the content and ends up with a slow burn that never really delivers.

One of the biggest problems with the film lies in its pacing. Thanks to a quick opening montage the audience gets introduced to each of the men on the team without ever really knowing their backstory. By adding another 20 minutes or so onto the film the audience would learn a hell of a lot more about the men and really have a vested interest in their well-being. By simply glossing over their backstory each of the men no longer becomes their character, they become the actor on screen. 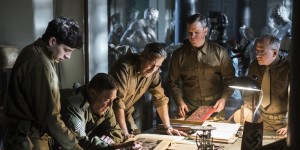 Clooney, with rights to such a compelling story, should have taken the alternate route and turned the film into a cable mini-series. Throughout most of the film the men go their separate ways throughout Europe and have their own adventures. Unfortunately, with a two-hour running time to worry about, none of the stories seem to get properly told. A mini-series would have given the content much more room to breathe and the story the respect it deserves.