Morley was recently the featured artist at the Downtown LA Art Walk promoting his new book, If You’re Reading This, There’s Still Time. After following his art for years, I got to catch up with him for Press Pass LA.

But lets step back in time first. It was two and a half years ago that I moved to LA, wide eyed, excited, and like most twenty-somethings, a little lost. I was new to the city, freshly single, and ready for change. I was exploring the East side on a hot day with a friend when we noticed it: a black and white rendering stuck to a fence of a hipstery guy in a sweater and the words, “This message is to let you know that I almost never think of you anymore.” Ha! How relevant. We probably almost crashed trying to get a photo and upon later research fell very much in love with Morley’s street art. Spotting his pieces around LA has become something of a pastime—his words simultaneously encourage hope for the future and inspire a happy nostalgia.

Lets see what a guy whose work reminds so many, that no matter how tough a time they are having, they are not alone, had to say about his work! 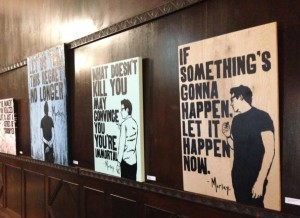 PPLA: First of all, is Morley your real name? What is its origin?

M: Morley is actually my middle name. It’s a family name and as a kid I was always embarrassed of it. It just sounded so dorky and un-cool. But as I’ve grown older, I’ve found that the very things that I desperately wanted to shed as a child, I’ve learned to value as an adult. The flaws and insecurities, the things that betray any kind of persona I’d like to convince people of, are in truth, a kind of gift. They prove our humanity and help us keep perspective on who we are. There’s a strange freedom in embracing one’s true nature, pimples and all, because the truth is that I’m kind of dorky and un-hip. So now the name seems to fit nicely.

PPLA: How did you and Steve Lazarides get in touch?

M: Steve and his people reached out to me after finding my work and deciding to contact me. It took a few e-mails for them to convince me that it wasn’t a practical joke being played on me.

PPLA: Tell us a little bit about The Outsiders, and what it’s like being grouped with artists such as Banksy?

M: I honestly try not to think about it too much as it’s pretty intimidating. The Outsiders work with so many of my art heroes that it seems disrespectful to even lump me in the same sentence. It can also
be somewhat problematic because it usually means that some people feel forced to have an opinion about me- which is usually a bit more aggressive and harsh because of a perceived level of success and overrated-ness. That said, it has been a wonderful experience having them in my corner simply because knowing that they believe in me enough to try and sell my work gives me an artistic confidence that is very creatively empowering.

PPLA: Do you have any opinions on Exit Through the Gift Shop and Mr. Brainwash (and the theory that he is actually Banksy playing a prank)?

M: I think the film is brilliant and while I can verify that it is not a prank and that Mr. Brainwash is very much a real person, it’s a testament to the power of the film that so many people are convinced
otherwise. I will be surprised if there is ever a better film tackling the subject of street art.

PPLA: You mentioned in an interview you were a fan of Shepard Fairey. Any other street artists in LA (or elsewhere) you follow?

M: Tons- so many that I always feel bad for the ones I leave out. Here’s an abridged list: Common Cents, Septerhed, Bumble Bee, Snyder, Desire, Obtain Cherish, Plastic Jesus, Ramiro Gomez Jr. and Cyrcle.
PPLA: Have you ever had a dispute with a fellow artist or law enforcement?

M: I have. The trick is to be respectful and not give them a reason to think of you as more than a nuisance to lecture and let go. I also tend to avoid spots that would put me in a lot of hot water. My aim is
not to do significant property damage, that would muddy the messages that I’d try to keep positive so the cops are generally a bit ambivalent but merciful when they catch me in the act. At least- so far.

PPLA: How long have you been creating these pieces?

PPLA: Do you remember your first piece? Do you have a favorite?

M: My first piece was “I promise you you’re not just a waitress” and I don’t know if I have a favorite- mostly because that depends on what has the most profound effect on those who see it- which is something I can’t ever really know. That fact is, of course, a little bittersweet.

PPLA: When we met at the DTLA Art Walk, you said that you drew inspiration for “You’re so much stronger than you think” from an NPR story on a man working at a suicide hotline. Can you tell us what inspired some of your other pieces?

M: I would say that each of my pieces is inspired by the day to day struggle of my friends, my family and myself. The first thing I think when I’m working on something is- would I relate to it? What would be
something that if I saw it would affect me in some positive way? I like to say that if I didn’t also struggle with the same things I try to encourage others in, I would be like a toned personal trainer
ordering someone to do more push-ups, but I’m not. I’m an out of shape guy who’s sweating right next to you.

PPLA: “If it makes you feel better, just pretend some company paid me to put this here” hits home for a lot of people living in LA, struggling to turn their passion into something sustainable. You came to LA for screenwriting. Is that still a dream?

M: Yeah, totally. But I have the sinking suspicion that even those who achieve some version of their dream just discover new aspirations to chase. It’s the curse that keeps us creative.

PPLA: You quote people like Hemingway, Twain and Voltaire in your blog and pull from foreign films like French favorite, “Breathless.” Are you a big lover of classics and international cinema? What role do they play in your work?

M: I love any kind of creative expression that challenges the audience on an equally intellectual and emotional level. There’s so much brilliance in the classics of literature, music, poetry, film, photography- and so on. I am more than happy to share them with people who may not have discovered them yet.

PPLA: Is your wife an artist as well? Where did you two meet?

M: My wife is a documentarian. She recently finished a film that if I told you more about would probably reveal more than is probably safe for me. I can say that it’s wonderful being with someone who’s also
creative but in a different way- because you can grow and inspire the other creatively without it being a competition. We had met through mutual friends- which I highly recommend if you can manage it. Bars
and online dating are a battlefield I’m happy to be retired from.

PPLA: I loved your “Tagged” post on the real You versus the Instagram You. Even though we all know everyone (for the most part) only posts the stuff that makes their lives look fabulous, why do you think we constantly feel the need to compare and question the quality of our own happy lives? And if we know this, why can’t we stop—just quit all these social media sites and live on our own terms?

M: That is probably the most significant question our generation faces in the current state of social culture. Why indeed? Ultimately I imagine it’s because we are all so desperate to belong, to be granted entrance beyond the velvet rope of the life we feel we’re missing out on. We all want to sit at the lunch table with the cool kids and if we can convince those around us that we are pretty enough, exciting enough and popular enough, we might actually believe it ourselves.

PPLA: Are you working on any other projects that aren’t as widely known as your street art? 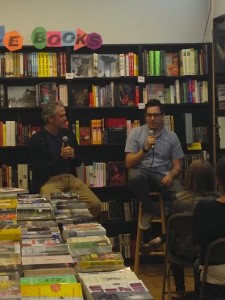 M: I wrote and will be directing a play, which will premiere this June in the Fringe Theater Festival. I wish I could say the name of the play but again, I’m limited by maintaining some level of secret identity.
So I guess if someone goes to every single play in the Fringe program they might discover mine. It’s a bit like discovering my work scattered across Los Angeles.

PPLA: Do you plan on doing any more interactive work like “The Matchbox Project”?

M: Absolutely. Getting to interact creatively with people who like what I do is super gratifying. While I enjoy creating work for those who have no idea who I am or what I do and getting to speak into their lives on the off chance that they stumbled across my work, being able to offer a kind word to those who feel a connection with me already has its own rewards.

For more of Morley visit iammorley.squarespace.com and to follow his book tour (happening across the U.S. through May 31st) check out morleybook.com