AS ABOVE, SO BELOW: MOVIE REVIEW

Director John Erick Dowdle cannot be held solely responsible for the mediocrity that was found footage horror film As Above, So Below. While a far cry from the worst film of the year, or even the season, it is still very guilty of several other transgressions.

The movie is about a young genius adventurer named Scarlett, played by Perdita Weeks. She is creating a documentary following in her recently deceased father’s footsteps as she gathers information about and attempts to discover the location of the Philosopher’s Stone, a mythical stone of unfathomable powers in the world of alchemy.

Her travels eventually lead her to the catacombs beneath Paris, where her, two of her friends, and a team of illegally operating spelunkers delve deep into forbidden parts of a very ominous setting. They are forced into a tunnel which the experienced cave divers are reluctant to explore due to one of their partners having explored it and never returned. As they explore the cavern, cave-ins force them deeper underground, and an evil presence begins to haunt the team.

Using a first person perspective to create a claustrophobic atmosphere is remarkably effective. However, the fault here is that there is a mythical, ominous evil afoot, and not being able to fully appreciate all of it is a shameful waste of the effects and cinematography. There are really interesting demonic effects and creatures that would easily haunt audiences, but with the shaky, ineffectual cinematography you aren’t able to fully appreciate the environment or the creatures within it.

Despite an unusually short run-time, the movie runs at a very slow pace. It takes a lot of time for the main portion of the story, and once it gets there, the only real threatening aspect is getting lost in the catacombs. It was a painstakingly slow film, and even when the inevitable body count starts to climb, there still isn’t any significant tension in the film. As a result, we have a horror movie with poor cinematography and not a lot of tension, being so completely undesirable on all counts.

There are a lot of strengths and weaknesses inherent in found footage films. One of them is establishing a fourth person narrative when you have a first person perspective. However, this is one thing that As Above, So Below does very well. They are able to get around the “only having one camera” problem by establishing multiple cameras by four separate members of the expedition. However, how those cameras are still functional despite rock slides, sudden impact from the ground and complete submergence in water is completely implausible, especially considering the natural sensitivity of all modern electronic devices.

The true breaking point of any horror movie is the characters. After all, if you don’t like the characters, then when they start to die you won’t care about the evils that befall them. Here, they actually do a good job of establishing the characters as people that you have an emotional investment in. However, they don’t quite flush them out enough. It would have been nice if they had talked more about some of the secondary characters so when they started to receive the psychologically torture from the confines of the catacombs. 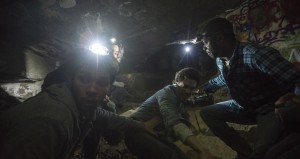 As Above, So Below is not a terrible movie, but it isn’t a good one either. The use of Christian mythology in the tangible world is an interesting concept, and there is a definite feeling of hopeless claustrophobia that hasn’t been established in a film since The Descent. However, the film’s pacing is completely painstaking, the cinematography takes away from anything that might have been otherwise terrifying or haunting in the film and the ending is a complete insult to the rest of the movie and the very evil and concepts it utilized previously. It would be a good rental or a late night Netflix, but not worth the trip to the theater.