First off, let me just say that this movie is a must see. If not for the acting or the story, then watch it for the music. The score of this film is absolutely incredible. It’s simple but grand all at the same time. I usually don’t comment on the music in films unless it is worth mentioning, and this music is worth mentioning.

An ever-present theme in Mr. Holmes was age. Flashback was used throughout the movie to give the viewer an insight into Holmes’ last case some 30 years ago. The transformation of Ian McKellen (actor playing Mr. Holmes) is astonishing. The actor transforms from a younger, more spirited Mr. Holmes to an older, fragile man right before your eyes. 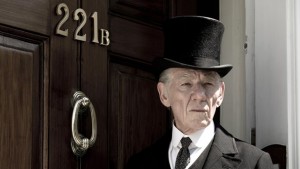 The use of flashback really helps the viewer get ahold of who Sherlock Holmes really is as a person. I am a big fan of all Sherlock Holmes movies, including the more recent go-around with Robert Downey Jr. playing the detective. However, I never really felt like I truly knew the character until seeing this film. Throughout the movie, Holmes repeatedly tells everyone that Watson created a character based on him. But that’s all he is in Watson’s books, a character, not a real person.

In my opinion, every other Sherlock Holmes movie focuses on that funny, smart, witty character created by Watson instead of the person behind the character. The real Mr. Holmes. This movie delves into the person Mr. Holmes really was and is (past and present).

I also enjoyed seeing a new partnership between Holmes and his housekeeper’s son, Roger. The Holmes and Watson partnership has been done so many times; it was refreshing to see a new pairing. I’m also a sucker for any partnership with a big age gap. I believe young people can learn so much from the elderly if they would just take a second to listen. Roger and Holmes bond over beekeeping but soon realize they have a lot more in common then they’d ever expected. It’s beautiful to see them learn from one another and become better people just from knowing each other.

I must warn you, this movie is slow to start, but once it takes off, it’s exciting! You find yourself wanting to jump through the screen to help the long-retired Holmes finally solve his final case. This movie is emotional, engaging, riveting and even a little bit humorous at times. It’s just a must see!