Press Pass LA was on site when the dynamic duo- Nadine Mundo and Rena Mundo Croshere held a private screening at Company 3 & Method Studios for their short film series “What Makes US” based on the journeys of five professional female athletes.

After the success of the documentary American Commune– a film about the sisters childhood experience at a commune in Tennessee. ESPN came to the filmmakers just in time for their next big project. 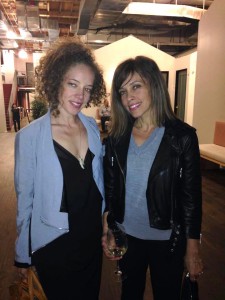 The FIFA Women’s World Cup was about to begin and the Mundo sisters felt inspired by the professional female athletes. Nadine and Rena pitched the idea to ESPN and researched up to 30 female athletes. They came up with the concept, subjects and characters “We are women directors- in an industry where it’s 99% men,” said Rena. “As story tellers we gravitate towards the stories of underdogs.”

Rena and Nadine selected Sydney Leroux-US Women’s Soccer Player, Carissa Moore- World Champion Surfer, Megan Rapinoe- US Women’s Soccer Player, Hilary Knight- Olympic Hockey Player and Verónica “Vero” Boquete- Spanish Soccer Player. All of the subjects shared their personal journeys from childhood, the moment they each realized what their dreams were and how they overcame obstacles as a female athlete.

US Women’s Soccer player Sydney Leroux dealt with bullies and her struggles with being different. The support of her mom kept her going.  Sydney told the Mundo sisters  “one day it will all be worth it,”  just as she was training with the US Women’s Soccer team for the FIFA Women’s World Cup.  She left the audience with this thought, “I hope to inspire people with my journey- always stay true to yourself and never give up.”

World Champion Surfer Carissa Moore experienced confidence and body issues in a male dominated sport. “It was tough to earn people’s respect- especially in surfing,” said Carissa. She did not like how people were constantly picking on her body. But her determination got her to win the ASP World Title among other achievements. Carissa ends her story to the audience saying, “I hope I changed the perception of women’s surfing in a positive way.” She wants to encourage women to not give up on their dreams.

US Women’s Soccer Player Megan Rapinoe grew up as a tomboy. Her talent excelled her career from college days at University of Portland to representing the United States in the FIFA Women’s World Cup. But it was not until she openly came out as gay- that Megan says she finally felt comfortable about herself. “I’m not ashamed of who I am- I want people to know my story,” says Rapinoe.

Hilary Knight wants every one to know that “it’s okay to be a girl and to play hockey.” Knight recounts how she was singled out by opposing team members for being a girl. She almost quit after threats of getting beat up- and hearing the parent of a player say, “Go after the girl- she doesn’t belong here.” But Hilary kept going and made a spot on the US Olympic team playing in the USA vs. Finland game which she had trained for her entire life.

Verónica Boquete was not allowed to play with boys growing up in Spain. However, that would not stop her from pursuing her dream of playing professional soccer. Eventually, Verónica would return to play on Spain’s National Team. The biggest moment in her career was in the UEFA Women’s Euro 2013 game against Scotland. Where she missed the penalty shot. “I had a feeling that was not the end,” said Boquete. She describes how the world stopped when she scored a goal in the 122nd minute. For Veronica, it’s the hopefuls out there that keep her going. “Girls that grow up & want to be like us- is the biggest motivation.”

There was not a dry eye in the audience at this screening! To watch What Makes US visit ESPN.