The gang is back and feisty! After a three-year absence, the Muppets are back! This time around, the lovable crew goes on tour overseas only to themselves involved in a jewel-heist caper with Kermit the Frog’s evil doppelgänger, Constantine.

Muppets Most Wanted brings in big-name stars like Ricky Gervais, Tina Fey and Ty Burrell lending their support to the cast with other fun cameos to look for throughout the film. 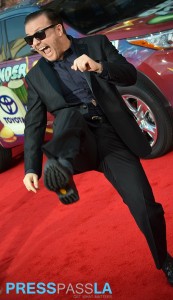 PPLA attended the press conference with Kermit the Frog, Constantine, Sam Eagle, Miss Piggy, in addition to Fey, Gervais and Burrell, where we got the inside scoop on filming the fun Muppet romp.

When asked why Kermit the Frog didn’t play the dual role of Constantine himself, he had a pretty logical answer. He said, “Well, you know it didn’t make sense for me to play Constantine ‘cause we do have a few scenes together and I don’t really work on green screen so we couldn’t really make that work. But plus, listen Constantine is actually a—a distant cousin, from Russia.”

For the human stars, they had to trot out some specific skills like singing and dancing for the Disney flick. For Gervais, he had Kermit the Frog dancing on his head. He shared, “Yeah, flap dancing on my head. So, yeah no one’s gonna be looking at me when—when we’re doing that dance. They’re gonna say there’s a frog dancing. That’s what—that’s what’s gonna be happening. So, yeah I got away with it.” 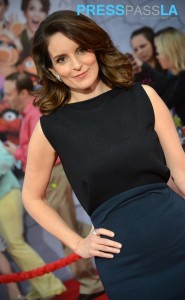 Fey didn’t feel as lucky when she had to sing. She joked, “Yeah, you know you have a good voice. And my singing sounds like if you’ve ever seen the version of Oliver when the little boy sings and you can hear the hiss of how loud they had to turn up the microphone, it’s—my singing sounds like that.”

Sam Eagle then chimed in, “America and the world were spared my singing voice except for two notes. I don’t know if you noticed that. I think it was by design. I spoke, I spoke my song but I was thrilled to do it.”

Burrell was most impressed with the work that the goes on behind the scenes while he’s just trying to act. He explained, “I was constantly inspired by the Muppets. I’ve never realized just how over rated I was until you go out and do a scene with somebody, who’s doing the, doing eight things at once…while all I have to do is try to remember my words which I fail at miserably.”

Miss Piggy kept true to form and arrived fashionably late and talked about her big moment with singer Celine Dion. “Well, working with Celine Dion it was a pleasure. It was a joy for her naturally. Yes, I’m—I’m only too happy to let her ride my coat tails up to the Oscar stage. Yes, it was a joy,” Miss Piggy boasted. “We only spent a little time together but—but it was very meaningful to her.”

Check out our PHOTO GALLERY from the red carpet.