Weezer is trail blazing their way back where they belong, the top of the music charts. Who knew a cover would lit up like it has?

Weezer continues to bless the rains!  This past May, the band released two covers of Toto songs, a response to a Twitter campaign started by a then fourteen year old fan in Cleveland who thought the band would be a perfect candidate to play “Africa.”  Turns out everyone agreed with her — the band’s version of the song became an instant viral smash, hitting No. 1 on iTunes the week of its release and landing on the Billboard Hot 100, where it remains.  Since then, “Africa” has shown no signs of slowing down: it is currently now a #1 Alternative radio hit for the second week in a row, breaking the record for most plays at Alternative radio in a single week, and giving Weezer their FIFTH #1, TENTH Top 5, and SIXTEENTH Top 10 at the format.  Weezer’s last Alternative #1 hit was “Feels Like Summer,”  which topped Mediabase’s Alternative Radio Airplay Chart in 2017, from the band’s last album, Pacific Daydream.  “Africa” is also currently Top 10 at Hot AC as well, in addition taking over pop radio at Sirius XM’s Hits 1, WBLI/Long Island, and WNCI/Columbus with Power Rotation!
LISTEN HERE
On the streaming side, “Africa” has amassed over 25 million streams to date, and has landed Top 25 at U.S. Shazam, while climbing steadily up the Shazam Worldwide Top 200.  The wildfire response to “Africa” comes on top of Weezer’s most successful summer tour to date. 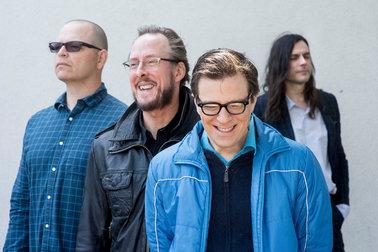