MUSICARES 2014 BENEFIT ROCKS THE HOUSE FOR A CAUSE 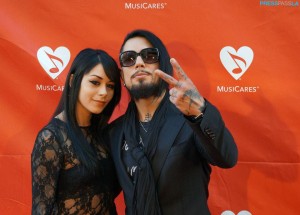 Hosted by actor Dax Shepard the evening began with a clip of the upcoming anticipated theatrical release of As I AM: The Life and Times of DJ AM, who’s memorial fund is a crucial part of MusiCares and “the only DJ that can hold down a Las Vegas nightclub.”

To kick off the four sets of performances, Grammy-nominated recording artist Beth Hart played a set of sultry rock n’ roll that included Chad Smith on drums ending with a blusey performance of Black Sabbath’s “Changes”. Three-time Grammy winner Keb’ Mo’ played two solo acoustic songs including a beautiful “I’ll Be Your Water.”  Craig Ferguson presented Jeff Greenberg with the From the Heart Award. Ferguson described Greenberg as “a well respected figure in the music industry, that’s like being the tallest midget in the circus.” Greenberg returned the favor by saying, “how about a hand for Jay Leno everyone.” In his acceptance speech, Greenberg stated that, “everybody is here because we love music, and this (MusiCares) takes care of people in the music industry.”

Then came time for one of the evenings showcases, a performance from Metallica. James, Lars, Robert and Kirk put away their electric guitars and brought out the acoustics, but this wasn’t about them so they performed four covers with no originals. Can you imagine Metallica doing an acoustic version of the Beatles “In My Life”, well they did, in true Metallica style of course and they ended with Ozzy’s “Diary of a Madman.”

Eagle Joe Walsh Presented Ozzy with the Stevie Ray Vaughan Award. Speaking from experience, Walsh stated that in the past he had “moments of clarity but no direction, I had no one to call, I was completely alone and I’m so glad to be a part of this and that MusiCares is here, I want to be a beacon of hope for musicians in trouble, because there is a place now for musicians to go.” Then the Godfather of Metal appeared from behind the darkened curtains and Club Nokia exploded in applause, Ozzy couldn’t believe he got an award for his sobriety and stated that, ” I should have been dead a long time ago.” from there is was time for The Madman to do what he does best and if think Ozzy can’t still rock, you’re right,  he KICKS ASS!

Ozzy was in top form and the best he’s ever been, a sober Ozzy is a good Ozzy his set list included , I Don’t Know, Suicide Solution (a tune about his friend Bon Scott from AC/DC who died at 33 of alcohol poisoning), Iron Man, and Crazy Train with Dave Navarro on guitar, after throwing a bucket of water at the audience in the front row, Ozzy closed his set with Paraniod and featured none other than Slash. 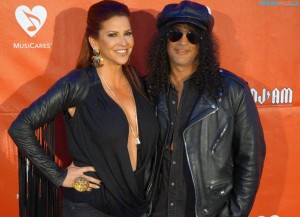 There could not have been a better way to finish the evening. Overall, 10 million dollars of public contributions to MusiCares has been recieved to help those to addicted recovery services. MusiCares holds weekly addiction support groups and the MusiCares Sober Touring Network helps individuals across the United States who can take musicians to recovery support meetings while on the road, to find out more visit www.musicares.org.

Check out our PHOTO GALLERY from this event.