This July,  National Dance Day swept across the U.S. as a celebration of dance education and physical fitness. The day was founded by So You Think You Can Dance producer Nigel Lythgoe. 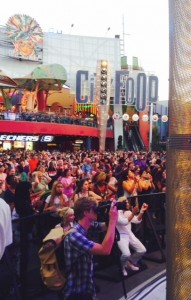 In Los Angeles, one of the events took place at Universal CityWalk with SYTYCD judge Mary Murphy along with Season 10 contestant Alan Bersten and Flash Mob America leaders teaching fans dance steps in the largest flash mob the park has ever seen. This year’s song also has a dance connection — it was written and performed by Dancing With the Stars‘ Mark Ballas. “Get My Name” had everyone shimmying and shaking at the Hollywood event.

Press Pass LA had the opportunity to talk to both Murphy and Ballas about the big day before they hit the 5 Towers Stage.

Murphy talked about how the event has exploded in such a short amount of time.  “Well, it’s really become huge. We never really anticipated that. We just wanted to get people dancing and moving in this country for their health and for fun. We just want to get people off their computer!” she said.

For Ballas, the day was even more personal because he was combining his two passions, dance and music. 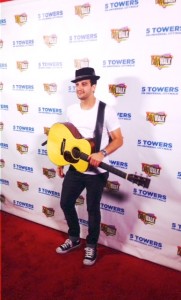 “It’s awesome to be here! Nigel Lythgoe and Adam Shankman, I am very grateful to them for using my song for National Dance Day, people are really enjoying it. The feedback has been awesome. To see this many people celebrating dance is already incredible and wonderful, but to see them dancing to my song while they’re doing it makes it even better,” shared the DWTS pro.

For Ballas’ fans who are looking to see what his next move is, look no further than this August when his new single “Miss Incredible” drops.

There’s even a video contest where fans can shoot a 60-second clip telling Ballas why they or a friend are incredible. Some of the winning entries will be featured in his upcoming video and one winner will be flown to Los Angeles for the official shoot in early August. The site to submit a video is ImMissIncredible.com.

As for Murphy, she’s continuing with her judging duties on Season 11 of SYTYCD. With many viewers feeling like contestant Ricky Ubeda has already won the show before the end of the season, the Hot Tamale Train cautioned things could change. 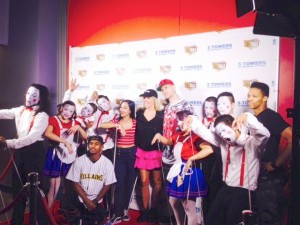 She said, “He certainly was challenged in the Viennese Waltz. If he doesn’t improve and he hasn’t dropped down, it will go into America’s hands, by the way. I think he is extremely talented. Let’s see what he’s going to do when he gets a Quick Step. For most of the kids, ballroom is often a challenge.”