One never realizes how magical a moment really is until it is gone. Drunk Stoned Brilliant Dead: The Story of National Lampoon does an amazing job of showing just how important the National Lampoon institution was to society.

From the 1970s to the 1990s National Lampoon was on the forefront of comedy. With magazines, albums and movies they set the standard for what was funny in America. Director Douglas Tirola’s documentary takes an in-depth look at the comedy powerhouse from its humble beginnings as a university magazine to the media company responsible for the careers of everyone from John Belushi and Chevy Chase to Gilda Radner and Bill Murray. 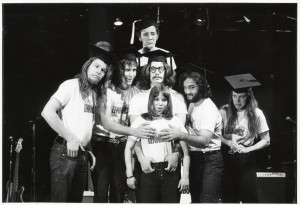 John Belushi, Chevy Chase and others in the original National Lampoon comedy troupe.

It wasn’t an easy road but Tirola highlights both the ups and downs of the journey by talking to those closest to it all. At its heart National Lampoon was all about rebellion and that comes through loud and clear in the film. The whole movie is driven forward by rock music, offbeat animation and uncensored interviews.

As the story unfolds one gets a sense of the grand scale National Lampoon was operating at its peak. Almost unintentionally Lampoon brought together some of the greatest comedic minds of the Baby Boomer generation and unleashed them on the world. Operating without censors both in print and other mediums they pushed the envelope of comedy and changed the world forever.

The caliber of interviews alone is worth noting. The film manages to get up close and personal with everyone from Chevy Chase, Ivan Reitman, John Landis and more. Chase has an especially poignant scene where he talks about the death of one of the founders of Lampoon that is quite moving.
Chances are you are a fan of National Lampoon and just don’t know it yet. Drunk Stoned Brilliant Dead serves as both an introduction to the company and a fantastic tribute.

The documentary opens in New York and on VOD/iTunes on September 25 and in Los Angeles at the Nuart Theatre on October 2.