The Music Box Theatre in Chicago and Wine Enthusiast Magazine united this Wednesday for the first annual National Wine and Film Series.

The film series offers a lineup of some the most appreciated and respected wine focused movies. The first night of the four day event, one each week throughout the month, featured the movie Sideways.

The Music Box Theatre is without a doubt one of Chicago’s most authentic gems. Having been opened in 1929 it has built a reputation in showing everything from cult classics and black and white movies to matinee films and independent features. Everything about this place truly exudes vintage cinema. In addition to its classic interior, there is now an expanded lounge and event room to incite even more movie enthusiasts. 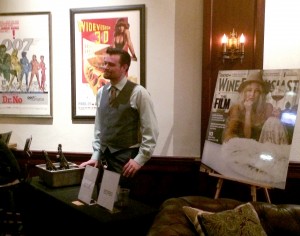 As the theater started filling with patrons, it was pleasantly surprising to see the event bringing in people from all walks of life. Once Sideways started playing on a vintage projector and the movie started to unfold it was evident the audience’s blend made for an atmosphere of laughter and enjoyment.

But the movie’s ending was the beginning to the wine tasting in the lounge. The recently added lounge had many comfy chairs and couches which complimented the décor’s modern flavor. The lounge featured two sommeliers from City Winery who were on hand to answer a variety of questions for connoisseurs of all levels of wine knowledge. The somms were eager to engage in every component of wine from grape regions and harvesting process to pairing principles and etiquette.

There was conversation of all the wine that was featured in the movie as well as shared experiences of the same vineyards traveled to. If you are a person that has seen the movie, you will not be surprised to hear that there were many jokes about Paul Giamatti and his hatred for merlot.

As the night came to a close, the Music Box’s Wine Enthusiast’s Wine and Film Series proved that film and wine are indeed a perfect pair. The series will continue throughout May in Chicago before traveling to other cities throughout the country.