In the four years since I started Press Pass LA, I’ve interviewed a lot of actresses. But I don’t recall being as excited about an interview as this. Whitney Rose Pynn stars in the new hit NBC show Aquarius alongside David Duchovny, but this is only the beginning of her career.

Whitney was initially cast for this show for a non-speaking one episode co-star but quickly turned this opportunity into being a integral member of the cast, and I’m not at all surprised. You see, I actually studied acting with Whitney for quite some time under the fantastic Director/Producer Paul Currie (Rampart, The Moon and the Sun, 2:22), so for me, her talent was never in question. I’m just honored to be the first to get to share her story with the audience that is quickly falling in love with her on Aquarius (which I, for one, can’t stop binge watching!) 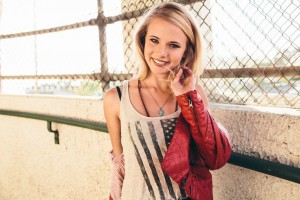 Part of the reason Press Pass LA came to be was in hopes of highlighting breaking talent like the talented people I saw around me four years ago. To me, Whitney proves that hard work and talent still pays off, even in a town where the odds are almost always not in your favor.

Speaking of which, Whitney is no stranger to tough career choices. She grew up in the small town of Sayville, NY, and spent the majority of her adolescence focused on becoming a professional ballet dancer. She attended The School of American Ballet for six years starting at the age of 10, performing in The Nutcracker, Sleeping Beauty, A Midsummer Night’s Dream, Coppelia, & Harlequinade with New York City Ballet, as well as, Le Corsaire and Mozartiana with American Ballet Theater. At the age of sixteen, she left SAB and turned her attention toward acting. She attended college at the University of Maryland where she majored in Theatre & Psychology and played a variety of roles at the school theater before making the move to L.A.

We sat down with Whitney to chat about her journey and how landing the role of Minnie on Aquarius has catapulted her career. 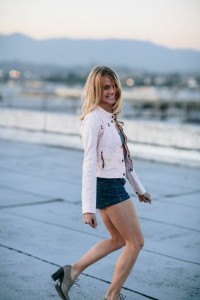 PPLA: Tell us what the process was like for becoming involved in Aquarius? From auditioning to booking this recurring role?

WRP: It all happened so fast! I remember my audition like it was yesterday. It was one of those last minute auditions that I found out the evening before. The breakdown described a playful, waifish hippie. Initially, it was a non-speaking co-star role that was only supposed to appear in one episode. They attached sides for auditioning purposes only. Even knowing as much, I was thrilled to go in for this project because these powerhouse women have cast Mad Men amongst a ton of other fantastic projects, so just having the opportunity to get in front of them was big for me. I went in decked out in full flowerchild garb complete with a flower wreath upon my head, and in true hippie style I chose not to wear a bra or even shave my legs, which was just my little secret…until now. By the end of that day, I found out I was casting’s number one choice, but they had to clear me with the network. The following day I got the green light from them, by Monday I joined SAG because I was at must-join status, and by Tuesday I was on set! Then they changed my character’s name and all of a sudden I was given lines too…before I knew it I was back for nine more episodes and just pinching myself. I literally and figuratively was welcomed into “the family”. It was all very surreal.

PPLA: Did you know then that David Duchovny was attached? When did you find out it was going to air on NBC?

WRP: Because my casting was all so last minute, I knew all the details going in.

WRP: Because I was so immersed in the “Manson world”, I didn’t have all that much interaction with [David] Duchovny. However, the first scene we had together, I was blown away by his professionalism. The way he handles notes and blocking with such ease and confidence was inspiring to watch.

PPLA: Any surreal moments or funny moments from set that stand out?

WRP: The entire experience has been surreal for me. Going to work at Paramount has always been a dream of mine. The first episode we were shooting on location, but when we went to work on the lot I was trying to play it cool. Didn’t want to show how green I was! But I will never forget the first time zipping around Paramount on a golf cart with Gethin Anthony and Emma Dumont and Tara Lynne Barr, who are now my near and dear friends, and Gethin leaning over to me and whispering something along the lines of “we are on a golf cart at Paramount, this feels like we’re really making a movie or something!” It was so sweet and refreshing to hear him say that! And I felt like it gave me the freedom to show my giddiness too.

I also remember the episode where my character has an acid trip that takes a turn for the worse. I felt like it was their little test for me. It was a pretty big freak out scene and it was my chance to show my acting chops. Right after we rehearsed the scene, the director of that episode, Jon Amiel, looked at me and said “You’re not just a pretty face, You can act.” And after we shot it, both Jon and Alex Cunningham, one of the writer’s of that episode and executive producers as well, each gave me a big bear hug and I felt like it was a turning point for me. I’ll never forget it.

I also totally did not scream at the top of my lungs and proceed to write an exclamatory entry in the journal I rarely write in when I read in the script that my character Minnie casually walks up to Beau Mirchoff aka Matty McKibben, topless, and greets him with a kiss as casual as a handshake. Ok fine, I did.

PPLA: Lots of actors dream of this opportunity. Tell us what is was like going from auditioning to this moment, where a series is premiering and you are in 10 episodes.

WRP: From day one, I have had no expectations and it turned into something so much bigger than I ever could have imagined. I have to say being invited to the premiere party at Marty Adelstein’s house and watching the pilot in a private screening room with him and the show’s creator, John McNamara, along with others was one of those experiences that I’ll never forget.

PPLA: When do they think you will you know if the series is being renewed? Do you have any other projects lined up in the meantime?

WRP: I knew going into the project that NBC had ordered it straight to series, but fingers crossed it continues on for many more seasons. Either way, this project has already opened so many doors for me. I will be guest starring on a two episode arc in the beginning of the second season of Murder in the First on TNT, which is about to air, so that is exciting. And, I’m currently up for leading roles in a few different indie films at the moment, so I’m hoping to shoot a feature this summer.

WRP: I’ve always wanted to be the narrator of a film. I feel like as a narrator you’re guaranteed to go on some transformative journey one way or another. Working on a Tarrantino or Tim Burton or Spielberg or David O’ Russell film may be too much excitement for this little heart of mine…but, dream big right?

PPLA: Advice for other struggling actors trying to break in? What was your turning point? What was the worst moment you had to push yourself to keep going?

WRP: Just keep going. And don’t listen to all the “No’s”. I have a huge box of every audition I have ever been on…if I thought about all the roles I didn’t book I would be a puddle of tears. You have to celebrate the small victories and try your hardest to just audition and forget. That mentality has kept me very positive, no use in beating yourself up too hard about factors that are out of your control. Not to say that always taking classes and continuing to learn and observe is not wise of course. Also, try to be as ‘go with the flow’ on set as you can. There’s enough divas out there as it is, and I feel like if you’re pleasant and easy to work with that goes farther than you would think.

PPLA: 3 things your fans don’t know about you! Or any other hidden talents or quirky hobbies you want to share? 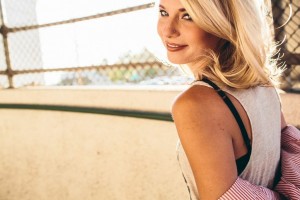 WRP: (1) I am a crazy cat lady. I only have two, but I am quite crazy about them. It’s not much of a secret though that’s all I post on social media…my manager is begging me to just create their own instagram accounts already.   (2) I swear playing barbies with my sisters Vanessa and Taylor is what got me into acting. We would get so involved, spending hours to set up their houses, and the plots got so much deeper than you’d think. I’d usually end up in tears because my Barbie got her heart broken or wasn’t invited to the party etc., but I loved every minute of it nonetheless. (3) Thus far, my favorite place on earth is Fire Island. It’s the barrier beach between the Atlantic Ocean and the Great South Bay parallel to Long Island where I grew up. There’s no cars there, terrible cell service, and it is the ultimate escape. I am very close with my family and thinking about spending some time with them and getting out of LA for a little breather, sounds like heaven!

WRP: We may have a tie. My gut answer to that question is, hands down, the people. I really feel like the cast and crew have become a part of my family out here in Los Angeles. But the story is a close second. I love the fact that even if I had absolutely nothing to do with this project I would be a massive fan of it. I have always had a strong affinity for the 1960’s. The spirit of it, the fashion, the change, people fighting for what they believed in. My parents were hippies in New York back then, which also sparked my fascination. It is more than unsettling considering current events that this show set back in 1967 is so relevant in 2015 with the current racial tension and police controversy sweeping the country. Furthermore, to play a character that was embraced by none other than Charles Manson, who arguably was the darkest figure of that era was unreal. The research I did for the role was haunting. But, I have always found myself drawn to the darker television shows like Dexter, Six Feet Under, and Carnivale to name a few, so to be staring in one of them was an added bonus. On a lighter note, it may sound silly, but it was so fun that because we were playing these dirty hippies we could eat and drink and sit on the ground in our wardrobe and no one batted an eye. That’s not very common on set. The minimal styling and no bras, etc. was pretty freeing too in every sense of the word.

Follow Whitney @WhitneyRosePynn and keep up on her upcoming projects on her IMDB.