Press Pass LA had the chance to talk with four-time Crossfit Games competitor Neal Maddox, who is widely know as one of the best CrossFitter’s in the world. After a successful football career in College, Maddox started CrossFit five years ago. 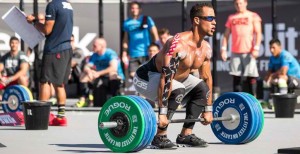 Neal Maddox made his first appearance at the CrossFit Games as a judge back in 2009. Maddox placed 2nd this year in the 2014 NorCal Crossfit Regionals earning him a spot to be at the 2014 Reebok Crossfit Games where he placed 15th out of 40 other elite male athletes. Keep in mind these are the top 40 male Crossfitters in the world! As well as being a top-level competitor, the 36 year-old is also the owner of CrossFit X-Treme Athletics in San Jose, California.

PPLA: How did you get into Crossfit?

NM: I had a friend who came over and said, “I have this workout for you to try out.” As it turned out that workout just happened to be “Linda” – three barbells of death! It was early 2009, and right when I found out about Crossfit, I loved it. So I started researching CrossFit more, and the first thing I found was the video called ‘Nasty Girls’, which was with the original girls- Annie Sakamoto, Eva T, and Nicole Carroll. They were throwing down real hard, and watching it I was just so happy and excited. I thought this is something I want to do!

So I applied for my Level 1 and within a month I was right into CrossFit. At that time, I wasn’t aware of the CrossFit Games, or I would have competed in 2009. I found out about it after the NorCal Regionals and it was too late to compete. As I couldn’t compete, I chose to be a judge instead. So I was a judge at the 2009 Games, and that was when I realized this is what I want to do.

PPLA: What do you think your biggest challenge is as an athlete?

NM: I think the biggest challenge as an athlete for me is… getting older. I’m the oldest guy out there. I’ve been the oldest the past couple of years. I’m competing against all these 20-year olds, and I’m in my mid thirties. A few more years, I’ll be in the Masters. There is a time when things start to drop off a bit. I still PR in my workouts and lifts all the time, but I’ve come to realize I’m not going to be the fastest guy out there and my recovery time will be a little bit longer than the younger guys. The intensity that Crossfit throws at you means it’s all about the recovery that you need to master. You need to listen to your body.

PPLA: What do you think sets you apart from other Crossfit athletes?

Maddox: What sets me part? I dont really compare myself to anyone else. All I know is that whenever I go into the gym, I’m never competing with someone else. I’m always competing with myself. I’m competing with my challenges and what ever fears I have to overcome. It’s always about me trying to better myself. In Crossfit there are always time during workouts where I’m thinking “what the hell am I doing this for” but that’s where you have to battle yourself, push through that mental barrier and achieve your ultimate goal.

PPLA: Do you have advice for anyone that has never done Crossfit?

NM: The best advice I can give someone is that the Crossfit Games are for those elite athletes. Everyone thinks going into Crossfit that they have to workout 20 times a day, and do all the things that the Games athletes do. THAT”S NOT TRUE! I would tell someone start off with learning the basic movements & find yourself a box (also known as a gym for non- Crossfitters) that has good programming. People try to add volume right away and what happens is the body isn’t used to that. It took me five  years to build up to the volume that my body can handle.

PPLA: What is your day to day routine?

NM: When it’s prepping for the Crossfit Games….it’s the Crossfit Games! I’m eating , sleeping , training and recovering. When I’m not doing that, I’m at the box I own CrossFit X-Treme Athletics training other athletes. That’s my life.

PPLA: What do you plan to do now that the Games are done?

NM: I was orginally going to join the NPGL (The National Pro Grid League) but you have off season, post season , your pre-season, it really never stops. So I’d pulled out of that so I can enjoy some time with my family.

Speaking of family, Neal mentioned his daughter who also does Crossfit (keep an eye on her).  But he told us, he’s not pushing her to make his dreams her dreams. He did add that she’s heading off to college soon and Crossfit teaches you skills you can apply to everyday life & discipline.

PPLA: We are curious to know what your diet is in order to train the way you do, what do you eat?

NM:  I pretty much carry around my Fitmark bag everywhere I go with all my meals in it to fuel me throughout the day- proteins, veggies etc. But at night, I like to pretty much eat whatever I want. I call it “carb backloading.” People ask me all the time do I eat junk? Yes, I do. I go to the store every night get a $2.50 piece of white cake and ice cream, and I eat EVERY NIGHT. When you eat the way I eat and train the way I do all day , it allows me to eat whatever I want at night.

Neal continued to joke about how he loves sweets. The sugar gives him that energy boost and helps him sleep at night . He also mentioned that when he’s not eating cake his girlfriend makes an amazing banana bread that’s top on his list right now! Hmm…I wonder if that would work for all of us? Probably not. I’ll stick to my Questbars for now as my Crossfit “Cheat dessert.” 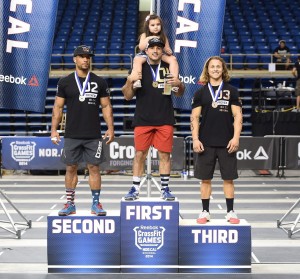 Neal left us with one great message  to close out our interview,“ Love what you do. If you don’t love what you do, you just dread every day that you have to do it.Crossfit training and coaching is my love, my passion, my life.”

We couldn’t agree more! I have to say I got to workout along side Neal Maddox last fall for the Crush Cancer event and I was simply in awe. I look forward to seeing how Neal’s career evolves over the next few years in Crossfit. He is definitely one to be admired, not only as a great athlete but someone who has a huge heart for his sport.