In his latest film, The Descendants director Alexander Payne once again dives into familiar dynamics of longing, deception and hopelessness to give audiences a black and white road trip drama starring Bruce Dern as a tempestuous Montana father who’s convinced he’s won a million dollar magazine sweepstakes, and Will Forte as the man’s estranged son who grudgingly agrees to drive him to Nebraska to claim his winnings.
Payne’s Nebraska captures something that one can’t put their finger exactly on. Bob Nelson’s script is sparse but, like its characters, gives just enough to resonate a lingering warmth amongst blunt familiar relationships. With an intimate knowledge of the Midwest by way of verbal intonations, social acceptance, tones and simple naturalism Nebraska simply bottles a place & time with a commanding realism – amusing & disturbingly at times, but certainly real. Phedon Papamichael’s Black & white photography is passed on to the viewer to give wonderfully picturesque windows of scenery – tableaus of fields, highways & streets to capture the placid & tranquil Americana that time may have forgotten about.

Bruce Dern’s lived-in Woody Grant is a force to be reckoned with here as the 76 year-old actor starts with the well-known wired-hair that Nebraska’s poster art displays & begins to unravel from there. Alcoholism, curmudgeoness, sorrow, gloom & unintelligible rambling all bear themselves to those who surround Woody, by-way-of Dern’s superior acting. The hopes & sympathies of Grant are never clouded or misaligned from Dern’s performance as distinctive qualities trickle in slowly asking the audience to accept him for who he is. The performance is so convincing and defyingly accurate that one can’t help but encounter some doubt of believability in one’s mind when Grant often speaks in short phrases and incoherent unbreathings, causing you to shift perspective. Woody’s wife, Kate (June Squibb) relishes in her role as a coarse, abrasive wife while pushing the sweetness of tenderly love to her take-it-as-it-comes son David, the underplayed and appreciated Will Forte. Bob Odenkirk and Stacy Keach also round out this small & simple, but stellar cast here for Payne. 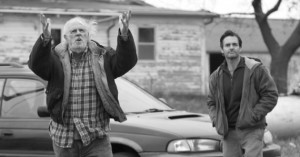 Overall, Nebraska is a low-key reflective storytelling piece with some sadness to season the palate. Payne has crafted an engrossingly poetic & strikingly tender road trip presentation that gives a thorough meaning to family & the changing times of small, simple America without ever feeling condescending or pandering. While some may discount Nebraska as being Payne’s third attempt at a road trip story after About Schmidt and Sideways, certainly no one can fault him for making a wonderful midwestern Don Quixote to will leave an impression.