Ah, Brokechella: the mid-April indie festival for art and music lovers in LA who don’t care to drop $400 on a sweaty desert clusterf*ck. It might not boast a holographic Tupac, but Brokechella has so much more than local live music to offer. 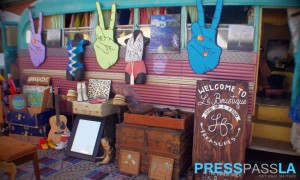 Arts collective cARTel produced the fourth annual event. We’ll start from the beginning… The location, right next to Villains Tavern and more or less underneath the Sixth Street Bridge in the heart of the Arts District of Downtown proved to be prime.

Food trucks lined up adjacent to vendors peddling their (#brokevogue) wares. Outside food and drink were not permitted, however festival-goers were encouraged to bring empty reusable water bottles to promote good green habits. Additionally, no paper festival guides were given out—instead, “augmented reality” guides with all festival information and maps could be accessed via DAQRI’s awesome free app.

Festival doors opened at 3PM, and during daylight hours Puppychella was in full swing. That’s right. Not only was No Kill LA (NKLA) on site, but attendees could bring their (pre-registered) pups along to frolic. 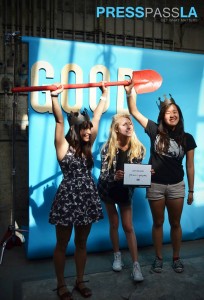 There were four stages total: the Shifty Rhythms Stage, Brownies & Lemonade Stage, The Lounge Stage, and the cARTel Stage. While it would be impossible to see every performance, we were able to catch a few: Liza Oppenheimer brought the broke to Brokechella, singing her whimsical tunes on crutches with a broke-n foot. Her lyrics inspired laughter from the couch lounging crowd with lines like “…why did you have to f*ck my friends?” Kera And The Lesbians killed it under the bridge with a contagious passion that had the whole crowd vibin.

In between sets we saw comedy acts, more vendors in The Lounge (honorable mentions: Kind Bars and Yelp), and GOOD Magazine, who put together a collaborative photo session where festival goers wrote down what good things they want to see more of in the world (#goodstagram).

The beer garden was a bit of a contention point, as consumption was restricted only to one stage, but the Lagunitas crew made it work. On top of all this awesome, there was still more to see. 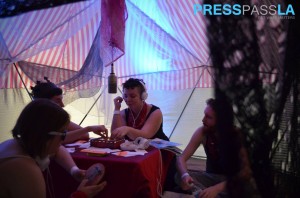 In addition to the mixed medium art pieces in the “Broke Kingdom”, next to The Lounge was a space housing interactive art. One installation in particular was a tent you could crawl into, backlit with soft blue-ish white light. Strangers and friends alike sprawled out around a table in the center with headphones and microphones hooked up to voice changers. There were index cards with different ideas written on them for what to say into the mic (and pens to make up your own), such as, “Describe the person across from you”. Another installation literally required you to “Walk on the Art”. All pieces were plastic wrapped and available for purchase. In the same room, one wall projected loops of five-second silent films, opposite a wall with couches where you could play a local programmer’s video game against others, on a giant screen.

Did we mention everything above could be had for just $10? The Brokechella team pulled out at all the stops in such a real way, it’s a shame there aren’t more events like this. 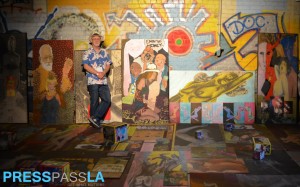 Check out our Brokechella Photo Gallery!