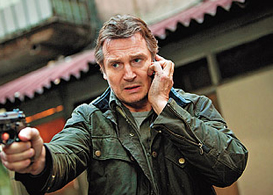 After Middle Eastern gangsters have taken a member of his family and plan to do them harm, Bryan Mills (Liam Neeson) must face impossible odds and a virtually endless slew of villains to reclaim his loved one.  Now the only real question is; was that the plot of Taken or Taken 2? If you can’t tell, you’re not alone.

Olivier Megaton has taken the reins for this installment of the potential franchise, and he made little deviation from the original success from four years ago. That alone is not enough for this to be considered a bad movie; in fact, it is the only thing about the movie that is truly disappointing or negative. It is unfortunate that it takes so many cues from the original film; however, there is something that this movie does that is completely original. What about the family members of those countless thugs that our hero so effortlessly dispatched throughout? Well, now they have amassed, and they want revenge. It is not the MOST original story, but it is a fresh take on a genre desperately needing revitalization.

Using Istanbul for the setting worked very well. Each twist, turn and alley seems dark and ominous while simultaneously not painting the Middle East to be some kind of eternal haven for scum and villainy. All too often, films tend to portray characters – not just the villains – from the Middle East as screaming, angry fanatics who would as quickly bomb someone than speak to them. Fortunately, that is not the case here as the villains are still threatening but not melodramatic. The characters in this movie are outstanding, and are more than enough reason to stay enthralled from one moment to the next. Famke Jansen and Maggie Grace, who play Lenore and Kim respectively, are excellent supporting characters despite their lack of screen time.

Liam Neeson of course does an excellent job as the former CIA man turned stoic bodyguard for hire. However, Rade Serbedzija, who plays the lead villain Murad Krasniqi truly stands out. He is subtle, diabolical and threatening. Although he is a man of few words, each one carries a weight that is undeniable. Another pleasant surprise Taken 2 has to offer is Kim’s ability to hold her own in a situation.  It is clear that the events of the first film have sufficiently hardened her, as much as she would like to distance herself from that experience. This is apparent when her father asks for her assistance to free himself from bondage. While she isn’t nearly as capable of handling the situation with his infallibly calm demeanor, she is more than a useless damsel in distress.

Perhaps the biggest problem with this movie as a standalone film is just how invincible Liam Neeson is. Even handcuffed to a steel pipe in the middle of nowhere with no access to any weapons, the audience is never led to believe that he is out of control or in any kind of danger. The fight scenes leave a little to be desired as well. The camera is a little too close with far too many cuts. With their often being more than two people to a fight all dressed in long dark coats and slacks, it is hard to tell just how efficiently Mills is taking out the bad guys.

Taken 2 delivers on everything that it promises, stopping just short of giving the audience anything more. However, with the amount of success generated from the original 2008 film, it’s little wonder that disappointment is in the cards. This movie is filled with stellar performances, excellent locations, music, and a story that is genuinely compelling with an ending that will be sure to evoke a reaction from the audience; all are a formula for success that is universally enjoyable. Two and a half stars out of four.