How do you follow a stellar year, where you won a Tony Award, married your long-time partner, had a memorable role in a David Fincher film, and published an autobiography? If you are Neil Patrick Harris, you announce via a video that you are scratching “Hosting the Oscars” off your bucket list.

Neil Patrick Harris will be hosting the 87th Oscars, which will air live on Sunday, February 22, 2015. Harris is no stranger to awards shows, having previously hosted the Tony awards four times, and the Emmys twice. He is also the most likely actor to join the exclusive EGOT (Emmy, Grammy, Oscar and Tony awards) club.

In addition to being a three-time Emmy winner for his hosting of the Tony Awards, he won an Emmy for his guest performance on Glee, and this year, he won a Tony Award for his stunning performance in Hedwig and the Angry Inch. And with his supporting turn in David Fincher’s Gone Girl, an Oscar nomination isn’t all that far-fetched.

Neil Patrick Harris is best known for his television roles as the lead in Doogie Howser M.D., and for his iconic role as Barney Stinson in How I Met Your Mother. In addition to Hedwig, he has performed on Broadway in Proof, Cabaret and Assassins, and was in the touring company of Rent. He had film roles in Starship Troopers and the Harold and Kumar films, and most notably, played the title role in Joss Whedon’s groundbreaking web series, Dr. Horrible’s Sing-Along Blog. 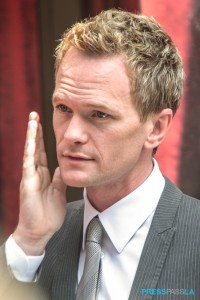 Harris received a star on the Hollywood Walk of Fame in 2011. In addition to being a triple-threat performer, Harris is a magician and juggler, and has both hosted and performed in It’s Magic, the annual fundraiser for the Academy of Magical Arts, where he is a past president of the board.

Neil Patrick Harris is a newlywed, having recently married his longtime partner David Burtka in Italy. He is currently on a book tour for Choose Your Own Autobiography, and will be signing books at the Grove in Los Angeles on Friday, October 24th.

Story and Photo by Kathy Flynn