NERVE HAS POTENTIAL BUT NEVER QUITE REACHES IT

Considering how complicated technology can make the suspense and horror genre, directors Henry Joost and Ariel Shculman actually incorporated technology to attempt to make a teenage suspense thriller. But just how successful is it? Nerve attempts to find out.

The movie stars Emma Roberts as Vee; a shy, awkward high school senior from Long Island. Her best friend Sydney, played by Emily Meade, is involved in a game called Nerve; a game that acts as a hybrid of truth or dare and American Idol. The game is split into two categories; players and anonymous watchers. The watchers come up with increasingly complicated and dangerous dares for the players, who earn money based on the number of dares completed. The more watchers that the player can accumulate, the higher their score. At the end of regulation time, the two players with the most watchers enter a 1 versus 1 final round, winner take all. 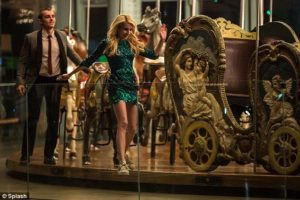 Emma Roberts and Dave Franco try to win the game in Nerve.

After overhearing that her crush doesn’t think that “she is his type”, Vee decides to prove something to herself by entering the game as a player. Along the way, she comes across Ian, played by Dave Franco, who is also a player in Nerve. In this sinister game where friends can quickly become expendable competition with high financial gain at stake for the players, who can you trust?

There are some great moments of suspense in the movie. Since the players provide full access to the entirety of their online profile, meaning that there is nowhere they can go or hide to avoid the increasingly insidious reach of the game. However, there are too many inconsistencies and incongruities that lead to frustrations in the movie’s plot. Most notably, that despite spanning a large amount of New York City and Vee receiving no less than 7 dares, the film only takes place over the course of 12 hours.

The film also feels significantly hindered by its PG-13 rating. There are a few screaming matches between former friends with no profanity, no licentious comments made or dares created by the Watchers for scantily clad “18”-year-old girls, and no shots of significant injury by the more dangerous dares. As a result, the film feels a little too safe, and a little too much like an after school special sending the message of the dangers of having a highly trafficked online profile, and a message to be weary of the often cruel nature of online communities due to its members having iron-clad anonymity.

The casting choices in the movie were also somewhat questionable; although it is no fault of the actors themselves. Roberts does an excellent job of playing out the role of awkward, intelligent, every-teen Vee, and I especially loved the subtle yet unavoidable puppy love, friend-zoned Tommy, played by Miles Heizer. However, the mean age of the stars of the film was 25, and the majority of them were meant to play high school seniors. It is not a new thing for stars that age to play younger roles; however, this is where the star power of the cast worked against them. Between stars Roberts and Franco, as well as Orange is the New Black alumni Samira Wiley and Kimiko Glenn, it becomes difficult to suspend ones disbelief.

The film isn’t without its charm and wit; after all the scene when Vee is dared to get a tattoo is especially entertaining, and does a great job of showing off her personality. There are also some legitimately suspenseful moments as the game escalates in intensity. And the premise in of the film itself is very creative and relatively original. However, the execution leaves something to be desired. This might have been a stronger film had the characters been more along the lines of college graduates trying to figure out what the next step of their lives should be as opposed to high school seniors on the brink of graduation – which would have also validated the casting decisions, and the film itself might have had more of an opportunity to be truly suspenseful and leave a deeper impact with an R rating. And, frankly, the amount of product placement borders on the levels of parody with how blatant it is. While far from a bad film, it is also not going to be on anyone’s “Best Of” list, either.