THE NEW GHOSTBUSTERS KEEPS THE SPIRIT OF THE ORIGINAL ALIVE

It’s been almost 30 years but the Ghostbusters are finally back on the big screen in a real movie. The cast might be different but the spirit of the original lives on for a new generation.

The Ghostbusters franchise needed a good shot in the arm and while the film itself isn’t a total home-run the end result isn’t nearly as bad as everyone was predicting. The lead cast, now all female, really do hold their own with the material and have you rooting for them throughout the entire movie. 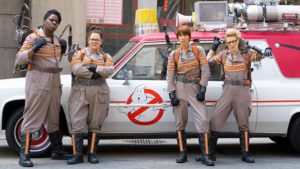 Leslie Jones, Melissa McCarthy, Kristin Wiig and Kate McKinnon are the next generation of Ghostbusters.

This time around the story follows Prof. Erin Gilbert (Kristin Wiig) a nearly tenured teacher at a prestigious New York university, who must confront a former colleague (Melissa McCarthy) for selling a book that claims she’s a paranormal investigator. Once the two meet again it doesn’t take long for McCarthy and Wiig, followed by the quirky Kate McKinnon, to join forces and stop the scary ghosts that are terrorizing the city.

Along the way they pick up newcomer Patty (Leslie Jones) who works for the transit authority but prefers the life of the Ghostbusters. Jones has so much charisma that she easily steals the movie away from the already charismatic leads. In fact it ends up being Wiig and McCarthy that end up getting in the way despite being the main characters.

The biggest problem with the film however is its need to acknowledge the past, even when it doesn’t make sense. This new Ghostbusters is a totally new incarnation and not at all connected to the universe of the original series. Yet director Paul Feig felt the need to put in so many cameos and so much fan service that it feels forced by the end. If only the movie would get out of its own way and embrace itself as a total reboot it would be the classic we’ve been waiting for all these years.

Not all of the humor works either. Chris Hemsworth as the new receptionist Kevin is inspired casting but ends up being totally wasted. His character, for a good portion of the movie, is a big dumb beefcake that spouts nonsense. He’s a running gag that exists just to be a gag. Say what you will about the 1984 version but it always felt grounded enough in reality that it never took you out of the movie. But every time there’s a forced cameo where an actor from the past is brought on screen and has to say some familiar catchphrase the fantasy ends. I’m looking at you Dan Aykryod.

That being said there are quite a few funny moments and some fantastic writing. But the pacing and tone of this new one will feel very off to diehard fans of the original. Feig’s style of comedy is very different than that of original director Ivan Reitman’s and it shows. All of his movies really live in the in between moments and side comments of characters on screen. This can be a little jarring in the  context of the Ghostbusters universe but he finds a way to make it work.

Make sure to stay until the lights go up in the theater because the credits are jam packed with Easter eggs and extra footage. They are also a fantastic throwback to the credit reels of the 70s and 80s where the movie just lets loose and shows the cast having fun. It’s a nice touch.

Will the film satisfy everyone? Probably not. But it holds up on its own merits and will make a whole new generation want to be Ghostbusters. I consider that a job well done.