NICHOLAS CAGE REDEEMS HIMSELF IN THE RUNNER

Nicholas Cage may finally be out of his B-movie slump. The Runner, though not a mainstream film, is a solid enough case to put him back in the spotlight where he belongs.

Let’s face it, Cage has been slumming it in the VOD arena for a while now. For some reason actors like John Cusack, Thomas Jayne and Cage have found a very comfortable spot creating at least one film a year in the market.

The Runner, despite its limited release, really is an exceptional film. Cage plays Colin Price, a politician who gains fame for taking on BP Oil head on after the 2010 oil spill. Though flawed, Price is also idealistic and seems to genuinely believe in the needs of the people. 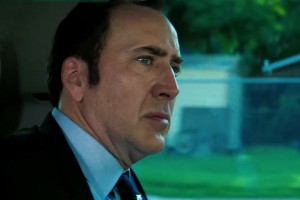 Nicholas Cage stars in the political drama The Runner.

After getting caught up in an adultery scandal Price steps away from the limelight and becomes a lawyer. This is where the main problem of the movie comes in since it really loses its focus in the second act. The film brings in his ailing father (played to perfection by Peter Fonda) and a new love interest (Sarah Paulson) which ups the emotional ante but shifts the whole tone of the story.

In any other movie such a tonal shift, especially in a political drama, would tank the film. But The Runner tries a new approach and makes it all come together in the third act. Cage tones down his usual antics and seems to play Price like a character from House of Cards adding layers of subtlety to all of his lines.

It is in the moments when all is lost for Price that Cage really shines. No one plays desperation like him and watching his slow spiral is fascinating. Price isn’t the standard loose cannon Cage usually plays which make his restraint all the more interesting.

Though the movie itself is a slow burn it is worth it if only for the final moments. The script is tense and full of fleshed out characters that you genuinely care about on screen. There are enough storylines at play that The Runner could easily work as a back door pilot for a really well done political show.

Sadly the film is only in limited release but can be found in theaters and on demand starting August 7, 2015.