The Night of 100 Stars Gala at the Beverly Hills Hotel was a night filled with celebrities sharing their predictions and thoughts on the upcoming awards. Ladies were dressed to the nines as they walked the red carpet to talk about their upcoming projects.

“Matthew has a wonderful, explosive way about him. He’s passionate, and he goes for it. He doesn’t edit. It makes his work very pure and beautiful too. I admired his speech,” Voight said afterward. “Matthew mentioned God, which is a no-no at the Oscars, but he did it with great dignity. Jared is a likeminded soul, for me. He’s a great actor. I’m so glad he won. I’m impressed with these guys. God bless them. This is a wonderful evening because of it.” 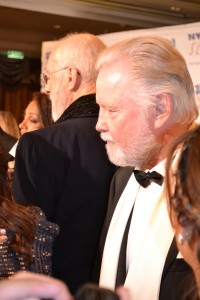 “I love Oscar Sunday.” says Doris Roberts. “There is so much work and passion that goes into these projects and its good to be recognized.”

Stars made there way to the Grand Ballroom to watch the biggest night in entertainment on TV. Inside they were treated to Oscar nominated film drinks such as the American Hustle and the Dallas Buyers Club which was a Budweiser and a shot of whiskey.

The night of 100 Stars is one of the biggest Oscar Parties hosted and the first to ever stream the Oscars live in Los Angeles!