A NIGHT WITH BILLY CORGAN

Ravinia– the oldest outdoor music festival in the U.S. and the summer home of the Chicago Symphony Orchestra since 1936–was an idyllic venue for the Aug. 30 Billy Corgan show, which offered an acoustic-rich 25-year summary of what could have easily been interpreted as a musical biography of Corgan’s life.

The blanket-strewn lawn encompassed a crowd as diverse as the contents of the picnic baskets and coolers, with attendees ranging from kindergartners to retirees. Equally diverse, the crowd in the pavilion seemed intent on one goal…awaiting Corgan’s stage entrance.

Opening the show was Australian-born Katie Cole, who delivered a swanky set from her debut album “Lay it Down,” that blended an almost jazzy vocal atop more modern country guitar riffs. Her humble onstage presence seemed totally contradictory to her confident crooning. Joining her acoustic playing were band mates Paul Redel on electric and Matt Reyes on bass.

The trio appeared to captivate the crowd with a set list that included “Lay it Down,” “We Started a Fire” and “Hearts Don’t Bend.” She even played homage to New Order by wrapping up her song titled “I Can’t Wait” with the lyrics of “True Faith,” which she proclaimed to be one of her favorites. As the sun was nearly set, Cole thanked attendees for being a great audience and Billy Corgan for letting her use his amps.

Shortly after Cole left the stage the Pavilion lights fell in preparation for Corgan to take the stage. As quickly as the electricity had been cut, shouts of “BILLY” were ringing through the air, filling the space. Walking onto the stage in a full suit, Corgan unveiled the stage backdrop, which looked like a stack of data-center computers. A single spotlight lit up a grand piano where Corgan sat down to start the show with “Chicago,” an appropriate opening ode to his hometown.

Corgan sang and played acoustic in what seemed like a one-man show for the first five songs, treating concert goers to hits “Today” and “Disarm,” among others. He then introduced his Zwan days and was accompanied on the stage by Jeff Schroeder on acoustic guitar for an admittedly fumbled “For Your Love,” which Corgan confessed had been a while since he played, and then a pitch-perfect “Rose March.”

In between interaction with the crowd on the status of the Cubs and the fact that “Jeff is a hockey man” and his favorite team is the L.A. Kings, Corgan brought the crowd down a notch with “Perfect,” which was intimately introduced as a song he wrote for his mother Martha, who had passed away in 1997. He followed that with a string of songs that included “Let me Give the World to You,” “Follow Me,” “Mellon Collie and the Infinite Sadness,” “Tonight, Tonight” and “Galapagos.” Whether it was acoustic with acoustic or acoustic with electric, Corgan’s and Schroeder’s playing harmonized like tea and honey, and brought about several standing ovations from the crowd. Corgan joked with the audience and said he “wonders if you’ll still be clapping for the second half of the show,” which only led to a more fervent round of applause.

“Methusela,” released on the 20th anniversary box set of Mellon Collie and the Infinite Sadness, was a surprising debut that Corgan said was written about his father Bill Sr. the same time the album had come out, but that he had never played it for the producers. He explained that at the time, he and his father were not on good terms. Despite the history of its incarnation, the song alone is worth purchasing the re-released box set. “33” and “1979,” accompanied by its familiar drum machine backdrop, rounded out this part of the show. 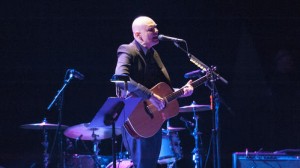 After incredible renditions of songs like “The Beginning is the End is the Beginning,” Corgan introduced Matt Walker on drums and the whole stage rocked out to “Ava Adore.” In addition to his pick-flicking, Billy appeared more natural and relaxed rockin’ out a bit on stage. Finally, the crew was joined by the band Ex-Cops and Sierra Swan for “Pinwheels,” “Stand Inside Your Love” and a cover of the Poppy Family’s, “Which Way You Going, Billy?” The show ended with Corgan introducing his new album’s title track “Burnt Orange Black.”
After several taunts, screams, yelps and whistles, Corgan and the crew returned to stage for a two-song encore of “The World’s Fair” and “Of a Broken Heart,” which included Billy’s brother and the entire cast of Resistance Pro on stage in their wrestling garb.

Overall, Corgan gave a stellar performance in his Ravinia debut that seemed a delicate mix of class and mayhem that both soothed and aggravated the crowd getting them on their feet and rocking at all the right points. It may be more than 20 years since the songs were written, and in some cases performed, but Corgan proved he still has what it takes to move the masses.