NIGHT AT THE MUSEUM: THE SECRET OF THE TOMB REVIEW

For what it’s worth, I honestly enjoyed the first two Night At The Museum flicks, so I’ll admit that I had some pretty high expectations of the series’ latest installment.

Night At The Museum: The Secret Of The Tomb takes us on another journey outside of New York, sending the characters to London, England, with their beloved tablet of Akmenrah. This tablet, understandably enough, has almost always been at the center of the conflict within these films; most likely the case since it’s the reason that the museum exhibits come alive each night to begin with. However this time, the tablet hasn’t been stolen, or been used to unleash dark forces. This time, the magic contained within the tablet has run out, which can only mean losing it’s power forever, thus, ending the lives of the museum characters. 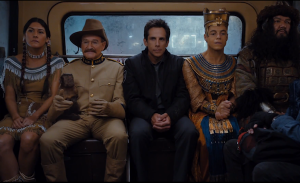 Led by Ben Stiller as Larry Daley (Ben Stiller), the rest of the crew, including, Robin Williams as President Theodore Roosevelt, Owen Wilson as Jedidiah, and Steve Coogan as Octavius, comes along as the familiar ragtag group of museum exhibits.

Despite the potential that this movie had, and the laughs it seemed to assure were there in the trailer, the film wasn’t very impressive. For starters, I found myself able to predict nearly every aspect of the plot, straight from the get-go. The originality in this film lacked greatly, especially considering all that had led up to it in the previous films.

I mean, one of the biggest plot twists in this film was a certain cameo from a certain someone who was referred to in the film as, “Huge Ackman.” This plot was particularly dry, and paced much too quickly. Some of the situations happened so quickly, and before anyone could digest what was happening, another conflict arose. This gave no one a chance to grasp the severity of the issues at hand, and all potential chances to develop the characters a little more in a scene seemed to have thrown themselves out the window.

These characters that have grown a little bit with each film but this time around all lacked in lines and screen time. And new characters that one would think might have a larger role (for instance, Akmenrah’s parents whom everyone travelled to London just to see, maybe?) really weren’t very prominent at all and became lost thoughts in the duration of the film’s running time.

And while we’re on the topic of character flaws, was I the only one who noticed that there was no mention anywhere regarding Akmenrah’s brother (and also the main antagonist), Kamunrah from the second Night At The Museum film? It seemed as though this film kind of glazed over the fact that he was a member of that royal Egyptian family.

Perhaps it’s just a little detail, but it’s a little detail that could have been easily added. Between the detail slip, the lack of character development and their empty lines, I’m wondering how this plot even worked? But anyway, generally speaking, even if a movie plot is lacking, we can still learn from its given themes, right? Apparently not in Night At The Museum: The Secret Of The Tomb.

It felt like a repeat of the first movie, exploring nothing further than Daley’s issues of being a father. To make things even worse, they had to keep repeating this theme over and over again until it just got boring. They didn’t offer subtle hints at the main theme to lead up to it’s final product either…each time the theme was hinted at, it was obvious what this theme was, and predictable as to how it would eventually be addressed. I was even disappointed in the continuation of Daley, himself.

In both previous films, he had a certain humor that helped to aid some of the comedy within them. It was plain to see that they tried to do the same with this film, however there was just way to much going on in this crammed plot to focus on it. Hence, the jokes weren’t as good as they could have been.

Stiller’s Daley became more of a stern, one might even say grouchy, guy. He did have his moments, but really, there wasn’t many of them. It should be noted that Rebel Wilson’s entrance as the security night guard of the British museum was commendable. She shone with her lines, delivering a flawless and definitely interesting portrayal. Her, along with a few other moments between various characters, did offer up some good laughs to the audience, just not enough as expected. In addition to some of those good, funny moments, there were also a few touching scenes that fans of the series will appreciate. Although the film maintained a predictable plot, and a lacking in certain areas, the film is enough to spark some interest and a few laughs for kids to see.