JAKE GYLLENHAAL TAKES US INTO THE LOS ANGELES UNDERBELLY IN NIGHTCRAWLER

Jack Kerouac called Los Angeles “the loneliest and most brutal of American cities; New York gets god-awful cold…but there’s a sense of wacky comradeship in the streets. LA is a jungle.” He’s right, and that is why Nightcrawler, a noir thriller about freelance crime journalism finds the perfect setting in the vast sprawl of the L.A. jungle.

Louis Bloom (Jake Gyllenhaal) has lots of ambition. From the start he strikes you as a man who had his conscience cut out to make room for more ambition. He is a night owl, comfortable wading through the city’s seedy underbelly and making his way any way he knows how, but that’s just a little bit more than the law will allow. But Bloom is not just some good ol’ boy, in fact Gyllenhaal looks to have lost some weight making his character look like a gaunt vampire.

His language is meticulous, even funny, and dotted with business 101 aphorisms. Combine that with dark, slicked back hair and a smile that belies the lack of emotion behind the eyes and Gyllenhaal has created a fascinating entrepreneur that resembles bits of Patrick Bateman and Bill Lumbergh. Bloom stumbles into freelance crime journalism in a chance meeting with a car fire and veteran stringer (freelancer) Joe Loder (Bill Paxton).

Louis is immediately drawn to the action, quick money, and self-satisfaction at seeing his work make the morning news. He hires Rick, played by Riz Ahmed, a young homeless man who is quickly in over his head. Bloom exploits Rick’s desperate situation by thrusting him in the middle of dangerous and ethically questionable situations. Riz Ahmed does an incredible job making Rick humorous and likable, but you can also see his inner turmoil as he is dragged further down by Louis’s relentless ambition.

Louis, as he is fond of reminding people, is a fast learner and with a bit of help from TV news director Nina Romina (Rene Russo), he starts making enough money to upgrade his equipment to state-of-the-art and his ride to a Dodge Challenger. But times are tough economically, and crime being down means that what footage he can get becomes even more valuable to the stations vying for a bloody lead. Soon Louis starts to infect his own narrative into the crime scenes, breaking the fourth wall he creates as the cameraman and becoming his own crime scene within a crime scene.

The results are intense to watch, these scenes are especially dark, with the only light usually coming from Louis’s camera or mangled cars. Aside from the treatise on society’s moral decay and the bonus of a kick-ass Dodge commercial, ‘Nightcrawler’ is very well-paced. Even in the quiet moments we are subject to Louis’ warped philosophies followed by Rick’s befuddled misgivings. In the unquiet moments the action is tensile, you feel like a coiled spring in your seat, especially when Louis has his camera on and that crazy look in his eye, which seems like all the time. Louis lives in a world in where media control goes to whoever proclaims the end of times as loudly and effectively as possible.

He understands this and leverages his position with Nina accordingly. The squeaky wheel gets the grease, as they say, and in tv news people pay attention to what scares them, or what they are told to be scared of. The people who report the news must sink to the morality of the world they have helped to manufacture. This includes Louis Bloom’s cold manipulation of the horror that he revels in capturing on film. 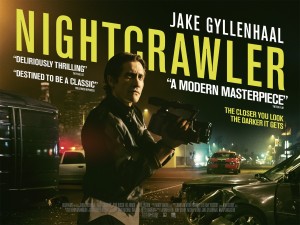 Of course Los Angeles is not the only city with nightcrawlers. But this city with its diverse geography, culture and socio-economic makeup makes it the model for the modern urban jungle where the camera wielding warrior can drop themselves in the middle of a hellish situation and then watch their horror show on the morning news while the rest of the city is just waking up.

I saw this film in downtown, the ostensible center of the city, and reminded myself of the crazy network of freeways all starting with ‘the’ that lead you not to a metropolis, but a seemingly endless collection of villages. Nightcrawler is very effective in not only shedding light on this maze of neighborhoods but also in creating the sort of person who survives and thrives in the moral underbelly of the urban night.