NINA BERRY’S OTHERKIN- TRILOGY WITH A CAUSE 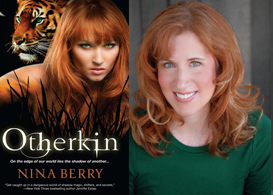 They say to write what you know, so why is Nina Berry writing a young adult series about a teen with a back brace that can shape-shift into a tiger? There’s actually much more to this series, along with a good explanation on her expertise from the author herself as I had the opportunity to speak with her recently about her YA trilogy Otherkin.

Otherkin, the first book in the trilogy, was released in August and is already being compared to the mega-hit theTwilight Series whose finale chapter concludes on screen this fall. The timing could not be more perfect for a new trilogy set in the paranormal to hit stores and this series brings the same action and  adventure with themes of love, friendship, self-esteem, and perseverance. Author Nina Berry has had a screenplay optioned, written for TV show Ghost Stories, and worked onMarried with Children and That 70’s Show, but truly shines when returning to her roots of finding inspiration in the stories of her youth. I sat down with this Hollywood local to discuss this trilogy, her love of ‘big cats’, and the possibility her trilogy might also hit the silver screen.

PPLA: Tell me a bit about the Otherkin series.

NB: Otherkin came from two ideas colliding. I had to wear a back brace growing up, the Judy Blume book “Deenie” was a big influence (the titular character wore a back brace), and I was a dork. I played Dungeons and Dragons and my character was a tiger shifter. But when she shifted, she lost her clothes, she was naked, but she was liberated. It made we wonder about my perception of me wearing a back brace, how changing your shape can change your perception.

PPLA: It seems your upbringing was a big influence.

NB: I grew up in Hawaii, and then I went to the University of Chicago. I wanted a different experience, something new, so I deliberately picked a place with seasons, it was a good experience, but I was glad to remember sun and warmth. The south side had great people and I got a great education.

PPLA: Did you always know you wanted to write?

NB: I wrote short stories as a child, used all the words I knew at the time. I was also a big reader, but I just wasn’t focused. I loved film and television and took all the classes that the University of Chicago offered. At first I thought I wanted to write for film, and I got my first job in LA at Playboy back when they had a film division. I had a great time but I was not driven. It came back to writing to what speaks to you, which were the books I read as a kid.

PPLA: What were your influences for Otherkin?

NB: There is no direct line, but there are many. Shakespeare, who covered everything, Charlotte’s Web by E.B. White, which is about the power of friendship, the key to emotional and physical survival, and writing, because Charlotte is a writer. The Golden Compass series, C.S. Lewis, and George R.R. Martin’s adult series.

PPLA: I noticed there is a tiger on the cover art of both Otherkin and the second book Othermoon, any other reason to for a tiger aside from your D & D days?

NB: I’ve always loved animals. It did start with a character that changed into a tiger. Did you know that the tiger is the world’s most favorite animal according to animal planet (dog is second)? Did you know that there are more tigers alive in captivity than in the wild? They are endangered, so I retweet petitions and make donations. Plus they are so damn awesome, not self-conscious; they don’t care what you think, which is a very attractive quality. I love the idea of shape shifting, putting your mind into another character’s body.

PPLA: I noticed on your website you include some supplemental writings set in the same Otherkin universe.

NB: It’s nice; it helps me to have fun with the characters.

PPLA: Tell me about your contribution to the Two and Twenty Dark Tales: Dark Retelling of Mother Goose Rhymes.

NB: I still have my book of Mother Goose rhymes my dad gave me when I was two years old. My favorite was Taffy was a Thief, which goes back to a Welsh myth about a demigod that steals three things: A bird, a dog, and a deer. I made it into a modern-day tale, which was a bit fun to figure out, to make it meaningful to a new audience.

PPLA: Any message to any aspiring writers?

NB: Keep at it. In my experience it is not talent, but people who will not give up. You have to decide, no matter what. Finish projects. Make it mean something. I was at the Big Oregon Book festival when a little girl came up to me and told me that my book helped a friend of hers who wore a back brace. That made it all worth it. Finish. You hear people say all the time that they have a great idea. Ideas are easy, the writing is hard.

Otherkin, book one of the series, is available now. Book two, Othermoon, will be available Jan 31, 2013 and the third and final book in the trilogy will hit bookshelves in early 2014.

Check out NinaBerry.com to purchase this book and to read the aforementioned supplemental material for free along with Nina’s entertaining blog.

Plus learn more about tigers and what else is going on with this up and coming author. Something tells me wolves aren’t the only shape shifting animals we will be seeing on screen!