NOTHING TO DREAD WITH DREDD 3D 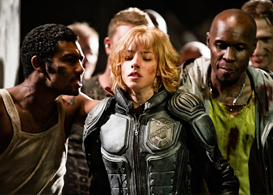 Whenever you hear about a movie that didn’t need to be in 3D and was only doing so to make a few extra dollars at the box office, this is the movie that people are thinking of. Director Mark Travis may have made a completely inept use of 3D, yet at the same time also completed one of the most interesting and entertaining action movies that is also a faithful adaptation of its source material.

Judge Dredd, played by Karl Urban, opens with an exposition while we are shown the impressive metropolis known as Mega City 1. Here, crime is rampant as nearly half of the futuristic dystopia can be considered a slum. The only line of protection between the criminals and the innocents are street judges; a group of special police forces who sentence crooks at the scene of the crime and do mercilessly. When two of the judges, Dredd and the rookie Anderson (played by Olivia Thirlby) are sent to one of the Mega Skyscrapers to investigate a triple homicide, they uncover a drug ring that threatens to undermine the authority in the entire city.

The violence in this movie is definitely dialed up to make the most of its R rating. And there are a few scenes that are enhanced not just by the 3D effects, but because of the use of slow motion; the latter of which is a result of the narcotic in the film aptly named Slow Mo. Although it is somewhat innovative to have a legitimate use for slow motion video to capture some of the more gruesome and violent scenes, it completely breaks up the pacing of the movie. While it is a lot better than films like 300, it is still a nuisance.

The visuals in this film are fantastic. At no point does Mega-City 1 feel like a mess of CGI. Every building is natural and blends in with the rest of its surroundings. Both the gritty, grimy feel within Peach Trees and the large mini-city style apartment complex that is the focal setting for the film exacerbate the feeling of desperation not just for the trapped judges, but also for the otherwise innocent inhabitants within.

The lack of music adds to the tension of the situation. As Dredd hacks one of the many computers in the building to make an announcement, there is nothing that can be heard other than the crackling over the speakers and then his powerful, intimidating voice threatening any and all that get in his way. It is a truly intimidating moment.

The characters, however, are the quintessential cornerstone of this movie. Dredd is the fully controlled yet powerful veteran street judge. Anderson is the psychic rookie who clearly makes a few mistakes but really has her heart in the right place. However, Lena Headley, who plays the drug lord and ruler of Peach Trees, definitely steals the show. Her very presence is enough to demand the respect of the numerous thugs within. She is strong, but still fair; not allowing the torturing of one of the judges when they’re captured. Granted, it’s so that other judges won’t be suspicious when they’re bodies are going to be collected – which only further demonstrates her ruthless intelligence – but it is still a gracious move on her part.

For the most part, there is very little wrong with Dredd. The slow motion portions are frustrating; however, they are few and far between. There is sufficient tension as the judges that are trapped within are constantly prevented an escape at every turn. The visuals are compelling yet not significantly jarring in any way. The characters are entertaining and do a great job of carrying the story, which although not the most original – it borrows very heavily from the source material as well as an Indonesian movie called The Raid Redemption – is still provocative and constantly demands the attention of the audience. This favorable adaptation of the comic is in contention for one of the better movies of 2012, and definitely one of the best comic book movies of all time.

Three stars out of four.